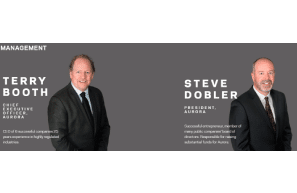 Aurora Cannabis Inc. and several of its former and current executives allegedly inflated one of its quarterly earnings results in 2019 through a fraudulent scheme that involved selling $21.7 million worth of cannabis back to itself through a company it had significant influence over, according to a lawsuit filed in a U.S. federal court.

The class-action lawsuit, which was filed in a U.S. District Court in New Jersey on Tuesday, alleged that Aurora and its executives engineered a way to artificially inflate the company’s fiscal 2019 fourth-quarter adjusted earnings before interest, taxes, depreciation, and amortization (EBITDA) by selling $21.7 million worth of dried cannabis to Radient Technologies Inc. in June 2019 in a deal that “lacked commercial substance”. The filing further alleged that Aurora later repurchased that same amount of dried flower back from Radient, an Edmonton-based cannabis extraction firm in which Aurora has a 12 per cent ownership stake as well as control of one board seat.

While the class action has yet to be certified by a U.S. federal judge and the claims have not been tested in court, the allegations highlight the operational challenges that many Canadian cannabis producers undertook in the early days of Canada’s recreational marijuana market, some of which ran afoul of regulations in order to meet the high consumer demand for those legal products and lofty investor expectations.

The plaintiffs allege that as the defendants continued to misrepresent the true condition of Aurora’s business, the company’s stock was trading at “artificially inflated prices”, which have subsequently plunged by more than 90 per cent since mid-2019.

The plaintiffs for the lawsuit allege Aurora violated two counts of the U.S. Exchange Act and requested a trial by jury.

In a statement, an Aurora spokesperson said that the company doesn’t comment on legal matters. “We maintain our standard of business practice is in accordance with all relevant securities law and fulfill any obligation to respond accordingly,” the spokesperson said.

The lawsuit claims that Aurora allegedly conducted its “roundtrip sale” of dried cannabis as the company was increasingly unable to meet financial targets that its executives stated it would hit during the early months of cannabis legalization in Canada when supply issues weighed on several marijuana producers’ bottom lines.