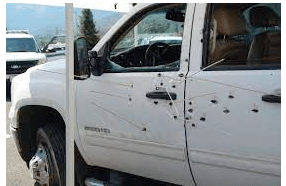 Officers killed Soobleej Kaub Hawj, 35, of Kansas City at a checkpoint outside the small community of Big Springs in Siskiyou County, not far from the California-Oregon border. On the night of June 24, authorities had been evacuating the region as the lightning-sparked Lava Fire burned toward the thousands of illegal cannabis farms in the area.

That’s when Hawj — who was high on methamphetamine, had a cache of illegal firearms and an out-of-state warrant for his arrest — pointed a loaded handgun at officers, rammed his truck toward them and died in a hail of gunfire, according to Siskiyou County District Attorney Kirk Andrus. He sent out a nine-page letter Tuesday that outlined his findings to the officers’ supervisors at the Sheriff’s Office, the Etna Police Department and the California Department of Fish and Wildlife.

The letter details a tense roadblock-turned-standoff with an armed and wanted Hawj who, by all accounts, was bent on disobeying the officer’s commands. Andrus’s letter counters a narrative that gained nationwide traction last summer that claimed the shooting was excessive force and motivated by racism in a community that had for years been trying to get rid of the illegal pot farms, many of which are run by Hmong residents.

The letter says officers were directing a line of cars and trucks leaving the area to turn west onto County Road A-12, the main thoroughfare out of Big Springs. As Hawj’s pickup approached the checkpoint, he attempted to turn east.

That’s when the officer said Hawj grabbed a .45 caliber handgun and pointed it at him, Andrus said.

One officer, who was just six feet from the handgun, told investigators it was “the darkest hole I’ve ever seen in my life pointing directly at me,” according to the letter Andrus sent the officers’ supervisors announcing he was exonerating them in the shooting.

The officers at the checkpoint opened fire, and Hawj’s truck lurched forward. The truck nearly smashed an officer before it crashed into a Department of Fish and Wildlife game warden’s pickup. The officer barely got out of the way, Andrus said.