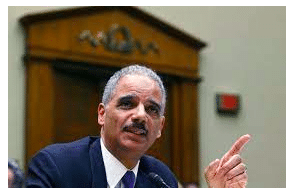 Former U.S. attorney general, Holder,  said that the country is “clearly on the path to decriminalizing marijuana” at the federal level as more states continue to advance reform.

Eric Holder, who served as the nation’s top law enforcement official under President Barack Obama, spoke on a drug policy panel hosted by Ohio State University’s Moritz College of Law on Thursday. He said he felt encouraged that the U.S. is trending toward more lenient laws on drugs that treat addiction as a public health matter, and he also argued that federal cannabis reform is increasingly inevitable.

The war on drugs has cost people their livelihood and taxpayer dollars, Holder said, and society is starting to move in a different direction.

“Now with regard to decriminalization, we are clearly on the path to decriminalizing marijuana,” he said. “You know it’s going to happen. We are on a glide path now.”

He added, however, that he felt conflicted by efforts to decriminalize other currently illicit substances like heroin and cocaine. A first-of-its-kind congressional bill to broadly end the criminalization of all drugs was introduced this session.

Former Attorney General Says U.S. Is ‘On The Path’ To Federal Marijuana Decriminalization