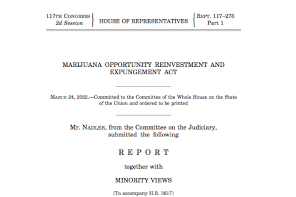 Congressional lawmakers on both sides are the aisle are already filing proposed amendments to a bill that would federally legalize marijuana that’s up for a House floor vote this week.

Some of the proposals are related to researching the impacts of the policy change, though others would add restrictions on cannabis products. Meanwhile, one Democratic-led measure from a lawmaker who has previously voted against legalization would maintain certain federal marijuana penalties.

The House Rules Committee meeting where the amendments will be either blocked from further consideration or advanced toward votes by the full body was originally scheduled for Monday, but that’s now been pushed back to Wednesday. So far, several amendments have been introduced—but it’s possible that more will be filed in the days to come.

The Marijuana Opportunity, Reinvestment and Expungement (MORE) Act, sponsored by House Judiciary Committee Chairman Jerrold Nadler (D-NY), already passed the House in 2020, but it did not advance in the Senate. It cleared the sponsor’s panel again this session in September.

Leadership confirmed late last week that the House would again hold a vote on the measure this week, and majority and minority leaders of the Judiciary Committee then released a nearly 500-page report on what the legislation would accomplish and outlining arguments for and against the reform.

Read the full MM report at