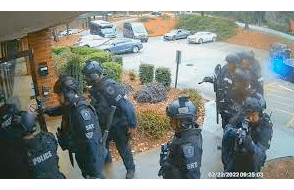 Law enforcement agencies in Georgia are being forced to return hemp-derived products they seized during recent raids, Channel 2 Action News reports. The products range from CBD to hemp-derived THC products, such as delta-8, that are considered legal under the state’s hemp law.

In November, the Madison County Sheriff’s Office raided Sahil Kumar’s grocery store in Danielsville and seized all of their delta-8 and CBD products – worth $30,000 – along with all of the money in his register.

“He took cash out of my register, and my cousin was there, and he had cash in his pocket. For two days, I couldn’t sleep, because I’m thinking in my mind, ‘We’ve done something wrong, we’re going to go to jail for breaking the law.’” – Kumar to Channel 2

Kumar’s products and cash were ultimately returned after he hired an attorney, Devin Rafus, who proved the products were legal and that deputies didn’t understand the state’s hemp law.

“Because the label has THC on it, law enforcement or the prosecutor’s office thinks it must be illegal because we all think it’s delta-9, which is illegal,” Rafus told Channel 2.

A lawsuit has been filed against Austin-Gaston and the state by companies that were subject to over-enforcement.