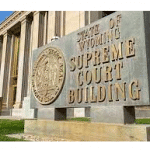 The Wyoming Supreme Court last week rejected a motion by the Attorney General’s Office to remove from the record the identity of a law enforcement officer whom the court found lied during testimony against Albin hemp farmers.

On May 21, Craig filed a motion calling for the Supreme Court to redact Briggs’ name from its report on the censure and remove statements indicating he gave false testimony. The attorney claimed the court lacked the jurisdiction to determine wrongdoing on Briggs’ part and had denied him due process.

The Supreme Court rejected that motion, ruling June 8 that the AG’s office was not a party to the censure and had no standing to involve itself in the case.

The Wyoming State Bar filed further evidence against Briggs prior to the decision, casting doubt on a DCI internal investigation that recommended he be cleared of wrongdoing. The Supreme Court did not cite that filing and the evidence therein in its concise ruling.

The back and forth before the state’s highest court comes months after a Laramie County judge threw out the case against hemp farmers Debra Palm-Egle and son Joshua Egle for a lack of evidence in August 2020. Prosecutors had sought to charge the Egles and their contractors, Brock and Shannon Dyke, with drug trafficking conspiracy charges that could have resulted in decades in prison.

Briggs investigated the case, which involved DCI raiding the Egles’ farm and seizing 700 pounds of hemp that DCI and the Laramie County District Attorney’s office tried to label as marijuana.

In last month’s censure, the Wyoming Supreme Court ruled Briggs testified falsely about a critical exchange with Brock Dyke during the raid on the farm outside Albin. Briggs lied again in a subsequent hearing when he said he had not read an email from defense attorney Tom Jubin asking him to correct his false testimony, the high court found.

While questioning Briggs on the witness stand, Jubin asked about his email.

“To be honest, sir, I didn’t read your email,” Briggs responded. “I forwarded it to counsel.”

In a subsequent investigation, the Wyoming State Bar found that statement to be untrue, using text messages exchanged between Briggs and the prosecutor, David Singleton, as evidence. In the text messages, Briggs described aspects of the email he would later say he didn’t read and complained about being asked to correct his testimony.

DCI conducted its own investigation into Briggs’ testimony and recommended he be cleared of any wrongdoing, according to court filings. “If I skimmed it that would be the extent of it,” Briggs told the internal investigators, according to Craig’s motion. “I don’t recall getting any jist [sic] of it,” he said.

In a June 7 response to Craig’s motion, Wyoming State Bar attorney Mark Gifford included a longer, more detailed record of the text messages between Briggs and Singleton. In those text messages, Briggs cites more specifics of Jubin’s email, including references to Jubin’s mention of an expert witness in CBD extraction and a discussion of the hemp plant stalks.

Those references made it clear that Briggs had lied to the court, Gifford wrote, suggesting the special agent wanted to avoid cross examination about the false testimony that drove Jubin to email him asking for a correction in the first place.

“It was easier for Agent Briggs to lie because lying cut off the questions and allowed him to maintain his credibility,” Gifford wrote.

Gifford also said Singleton, the prosecutor, had signed a sworn affidavit agreeing that Briggs had testified falsely. He called for the Wyoming Peace Officer Standards and Training Commission, a board with oversight authority of the state’s individual law enforcement officers, to review the case and decide if Briggs gave false testimony. POST has opened an inquiry into the case, according to a report from Oil City News.

DCI director Forrest Williams did not respond to a Monday message requesting comment.