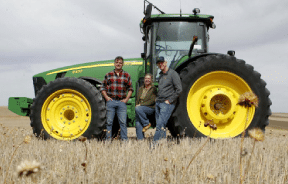 A Laramie County woman is suing the Wyoming Division of Criminal Investigation and one of its officers after being accused of growing marijuana on her hemp farm, court filings show.

Debra Palm-Egle and her son, Joshua, were charged in 2019 with growing and intending to deliver marijuana after DCI agent Jon Briggs said samples from their Albin farm were above the legal THC limit in Wyoming. THC is the psychoactive chemical that gives marijuana its high. Hemp, like marijuana, is also a cannabis plant, but has much lower concentrations of THC.

Their case was dismissed less than a year later after the court found there wasn’t enough evidence to proceed.

Palm-Egle filed the lawsuit against Briggs, DCI and the Wyoming Attorney General’s Office in April in Laramie County. It was moved to federal court on Tuesday, since it deals with a claim of civil rights violations.

The farmer was a vocal proponent of hemp legislation passed in 2019, which allows Wyoming residents to grow and possess the plant as long as its THC content is below 0.3%.

The Wyoming Supreme Court found in 2021 that Briggs had lied about an exchange he had with one of Palm-Egle’s contractors, who had provided three test results showing legal amounts of THC to Briggs while the officer was executing a search warrant on the farm.

Briggs testified in a hearing that he remembered the tests as possibly showing an illegal amount of THC.

The suit alleges Briggs lied in an affidavit used to obtain a search warrant for the farm, and had begun investigating the Palm-Egles based on insufficient information. Court filings state the investigation started after Briggs received a tip from a neighbor who “had a hunch” that marijuana was being grown on the farm after seeing a greenhouse being built there.

Palm-Egles maintains the November 2019 search of her farm, and DCI’s seizure of around 700 pounds of hemp, were illegal.

The prosecutor in the original case, Assistant District Attorney David Singleton, was publicly censured last May by the state bar association for failing to correct what he knew was false testimony. Singleton was appointed as a part-time hearing judge to the Cheyenne Municipal Court in the fall.

According to the complaint, two claims Palm-Egles filed with the state were rejected in May and September 2021.

Now, she’s asking for $250,000 in damages — the standard amount for tort claims under the Wyoming Governmental Claims Act. In addition, she’s seeking around $55,000 for attorney fees and court costs from the initial case. Other damages could be awarded if she wins the suit.

Attorneys for Palm-Egles and Briggs, as well as DCI Director Forrest Williams, did not respond to requests for comment on Wednesday.