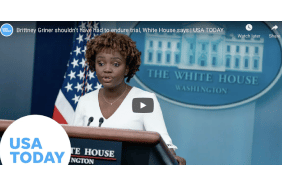 The White House is repeating calls for Russia to release Brittney Griner after she was sentenced to nine years by a Russian judge on drug charges. RELATED: Brittney Griner sentenced to nine years in Russia for drug charges https://bit.ly/3oV4D0f The trial of Brittney Griner ended Thursday with the WNBA star expressing remorse for accidentally packing vape cartridges with cannabis. Hours later, a judge sentenced her to nine years in prison, and Griner headed back to the pre-trial detention facility where she has been held since her arrest at a Moscow airport in mid-February. She’ll stay there. For now. Sometime in the coming weeks, Brittney Griner will temporarily disappear while on her way to a female-only penal colony. That is the reality for a foreigner in Russia’s legal system, leaving their families worried and in the dark.