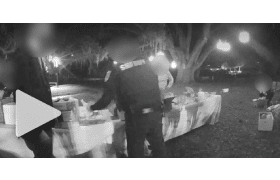 SEMINOLE COUNTY, Fla. – A woman who attended a wedding in Longwood, Florida earlier this year has filed a lawsuit against the caterer after the food served during the wedding allegedly had marijuana in it. According to a lawsuit, which was filed on Monday, Virginia Ann Tayor-Svoboda said she suffered “severe, permanent injuries” and became “immediately ill” after eating the […]