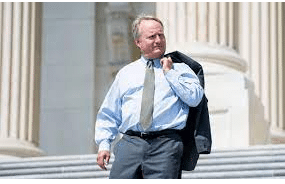 A bipartisan group of congressional lawmakers filed a bill on Thursday that would direct the attorney general to create a commission charged with making recommendations on a regulatory system for marijuana that models what’s currently in place for alcohol.

The measure will “provide lawmakers across the ideological spectrum the opportunity to engage on cannabis reform by creating a fair, honest and publicly transparent process for the federal government to establish effective regulation to be enacted upon the termination of its 85-year prohibition of cannabis,” according to a summary from the sponsors.

Today, I introduced bipartisan legislation alongside @RepJeffries and @RepBrianMast to better prepare the federal government for the inevitable end to #cannabis prohibition. https://t.co/xIDOqm9pEC

It's time for the federal govt to respect the will of voters, Democrats and Republicans alike, and begin a serious conversation about what a post-prohibition America should look like.

The PREPARE Act jumpstarts that conversation and paves the way for more comprehensive reform.

Here’s what the new bill would accomplish:

Require the attorney general to establish a “Commission on the Federal Regulation of Cannabis” within 30 days of the bill’s enactment.

The commission would be responsible for studying federal and state regulatory models for alcohol and make recommendations about how they could inform marijuana regulations.

Among other things, the commission’s report must look at the impact of marijuana criminalization, particularly as it concerns minority, low-income and veteran communities.

The panel would also examine the “lack of consistent regulations for cannabis product safety, use and labeling requirements” as well as the “lack of guidance for cannabis crop production, sale, intrastate, interstate, and international trade.“

It would also need to make recommendations on how to remedy cannabis-related banking and research barriers as well as address measures to ensure the “successful coexistence of individual hemp and cannabis industries, including prevention of cross pollination of cannabis and hemp products.”

Members would further be mandated to study and make recommendations on “efficient cannabis revenue reporting and collecting, including efficient and tenable federal revenue frameworks.”

The panel would be required to issue a report to Congress within 12 months.

The panel would include representatives of:

U.S. Attorney General Would Be Required To Create Marijuana Commission To Advise On Legalization Under New Bipartisan Bill