It’s been nearly 25 years since California became the first state in the U.S. to approve medicinal marijuana. As of this month, all but 16 states allow legal sales and possession of the drug in some form, with California being among the 11 plus Washington D.C. that allow recreational sales for adults. But along with that, California’s compassionate use collectives dried up. 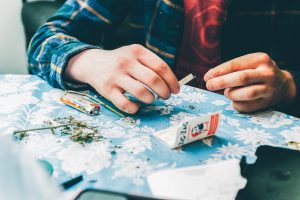 The 1996 Compassionate Use Act allowed growers and distributors to donate a portion of their marijuana crop to small, non-profit collectives (and later dispensaries) which in turn would pass them along for free to indigent medical marijuana patients. Many of these were suffering from conditions like epilepsy, AIDS, cancer, chronic pain and PTSD, and were able to avoid dangerous, addictive opioids and other powerful drugs.

But when Proposition 64 passed in 2016, legalizing marijuana for recreational use by adults in California, the crop started being taxed at virtually every stage of production and distribution. The compassionate use donations became virtually non-existent, as Prop. 64 called for a sunset on collectives by January 2019. (Today there are only a few dozen compassion programs through which a small number of patients receive free cannabis.) Although any adult over 21 can gift any other adult over 21 with up to one ounce of the drug at the time, dispensary owners risked breaking the law if they did so; it was considered illegal advertising. Those stores could lose their licenses. Therefore any cannabis that made its way into consumers’ hands was treated as a sale. Some suspect this is a significant part of what is driving black market sales.

Los Angeles marijuana business lawyers note however that there is a measure of relief in sight. In October, Gov. Gavin Newsom signed Senate Bill 34 making medical marijuana donations tax exempt. It goes into effect March 1st. State analysts estimate some $53 million in medical cannabis could be donated annually, enough to gift one gram of flower daily to 125,000 patients annually.

The new law will once again allow charitable cannabis giving by adding a special code for compassionate class cannabis. The law also extends growers a $9.25 per ounce cultivation tax break for what they donate to indigent medical marijuana patients. Retailers will be exempted from the 15 percent excise tax they pay for cannabis donated to patients.

What we don’t yet know is how many growers and retailers will participate. As it stands, many are already grappling with substantial losses, thanks to high taxes and testing costs and stiff competition from the black market. SB 34 allows cannabis companies to donate, but it still means they are in effect paying the state to make a donation. But even if state estimates are correct that only 1 percent of the existing legal crop is donated to needy patients, that would still work out to about $31 million worth of cannabis.

However, very few people have state-issued medical cannabis IDs these days. They are time-consuming and expensive to obtain. But one wouldn’t necessarily need to present a medical marijuana card to obtain a donation. Stores may establish their own policies for who qualifies. Some require proof of a doctor’s recommendation and some type of proof of disability, such as the stub of a welfare check.

In certain locations, like Berkeley, local laws require a certain portion of donations go to the needy. Prior to SB 34, many stores have launched fundraisers to make ends meet so they don’t fall short on their obligation. For many, SB 34 means they will no longer need to do so.