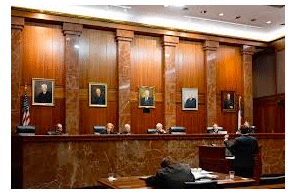 Texas’ ban on the manufacture of smokable hemp is justified due to health concerns tied to inhaling smoke, a state attorney argued Tuesday, even though there’s no prohibition on the sale of such products made by out-of-state companies.

After decades of cannabis prohibition that did not differentiate between marijuana and hemp, which contains miniscule amounts of THC, the psychoactive compound in marijuana, the federal government undid the shackles on domestic hemp production with its passage of the Agricultural Improvement Act of 2018.

Also called the Farm Bill, it authorizes the transport of hemp-based products across states lines for commercial purposes, and the sale, transport and possession of these products with no restrictions. But it did give states leave to devise their own hemp-regulation schemes.

Taking the feds’ lead, the Texas Legislature passed HB 1325 in 2019, authorizing the licensed cultivation of hemp and barring local governments from passing regulations on hemp processing, or the manufacture and sale of consumable hemp products.

The bill did, however, direct the state’s health and human services commissioner to adopt a rule effective August 2020 stating, “The manufacture, processing, distribution, or retail sale of consumable hemp products for smoking is prohibited.”

Four companies quickly sued, led by Dallas-based affiliates Crown Distributing LLC and America Juice Co., makers of Hempettes, which are sold in packaging identical to cigarette packs and are marketed as “the first cigarette-styled CBD pre-roll in the world.” CBD is a chemical derivative of the cannabis plant that does not produce the intoxicating effects of marijuana.

CBD is in hemp and marijuana and is said to have many health benefits, though they are anecdotal and not scientifically proven. It is an ingredient in many products that run the gamut from sleep-aid tinctures to pain-relief lotions, chap sticks, beautifying face masks, bath bombs and oils for dogs and cats.

After blocking the law with an injunction, a state district judge in Austin issued a final judgment last November declaring it unconstitutional and blocking enforcement of the rule barring in-state production and sales of smokable hemp products.

In defending the rule before the trial judge, Texas Attorney General Ken Paxton’s lawyers called no witnesses and offered no exhibits. They did not even cross-examine the challenger’s witnesses. Their defense focused on a rational-basis argument pressed Tuesday before the state Supreme Court by Texas Deputy Solicitor General Bill Davis.

Davis argued the statute should stand because it is only subject to rational-basis judicial review, so Texas only needs to show it is rationally related to a legitimate government interest.

The state argued in briefs the law furthers the government law enforcement interest of mitigating the difficulty police would have in distinguishing hemp from marijuana. But Davis cabined his arguments Tuesday in health issues and explained why the state believes it does not have to back its claims with any evidence.

“If I could focus on one it would be the health concerns that underlie inhalation of any kind of smoke,” Davis said. “I think if we were litigating this case in 1950 it might be the case that we would need evidence that inhaling smoke is not good for you, but in the 2020s we don’t need that evidence. That’s something that the rational-basis standard allows us to make a showing of without an evidentiary burden.”

Justice Jane Bland asked Davis if that reasoning is undercut by the fact out-of-state manufacturers can sell their smokable hemp products in Texas, and if the state has an interest in ensuring people in other states don’t smoke hemp.

“The state does have that interest but the statute doesn’t pursue its objective to that extent,” Davis replied. But he claimed under the rational-basis standard Texas was justified in taking an indirect approach to addressing its health concerns and it could go further and ban all sales of such products.

Justice James Blacklock asked Davis if the rational-basis standard was the right test, or if there was an even lower standard that should apply that would force the court to give even more deference to the state.

Poking holes in the hemp companies’ case, Blacklock added, “I just wonder whether there’s any liberty or property interests that’s rooted in the legal traditions of this country that you can point to say I’m entitled to review by the courts on the basis of the Constitution of the government’s decision to regulate what I’m doing in these sorts of areas.”

Davis readily agreed. He noted that before the state’s legalization of hemp production, Texas law did not distinguish between the flower, or bud, of marijuana plants and hemp plants – they were both illegal.

But the hemp companies’ attorney, Constance Pfeiffer of the Houston firm Yetter Coleman, eviscerated the state’s rationale. She argued its alleged fears of Texans suffering health complications from smoke inhalation have nothing to do with manufacturing or processing smokable hemp products.

“It’s not saying this has an environmental impact, or it’s a nuisance, or it’s something harmful to public health created by the manufacturing of smokable hemp. They are saying we are trying to mitigate end use. And simultaneously they are saying local governments cannot prohibit end use,” she said.

She added if state legislators sincerely wanted to protect public health they could have barred anyone under 18 or 21 from buying hemp cigarettes or cigars or vape cartridges. In the same session they passed the statute at issue, Pfeiffer noted, they raised the legal age for buying and using tobacco from 18 to 21.

“They’re asking for not just any conceivable possible basis kind of review, they’re basically saying ‘If we can stand here and say public health you can’t scrutinize the statute,’” Pfeiffer said.

The law’s irrationality is further revealed, Pfeiffer continued, by the fact the Dallas-based plaintiffs merely had to move some of their operations to Oklahoma “where they can lawfully manufacture and process hemp and ship it right back into Texas.”

Despite the strength of the challengers’ arguments, several of the all-Republican Texas Supreme Court’s nine justices appeared to be looking for a way to let the statute stand.

In closing, Davis, the deputy solicitor general, said the rational-basis standard does not task courts with assessing what the Legislature had in mind when it passed a statute.

“That’s correct,” Davis replied. “Because the court is looking to whether the statute does something that is beneficial to Texans regardless if anyone articulated that rationale.”

The court did not say when it would rule on the case.