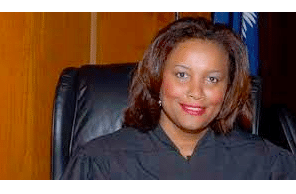 ‘I had more time than people in there who killed somebody,’ says Willie Roy Goodwin, who received the harsh sentence from the Supreme Court hopeful

In 2009, Willie Roy Goodwin went before Richland County Circuit Court Judge J. Michelle Childs to plead guilty. He didn’t really have much of a choice, after inviting an undercover cop into his house repeatedly and selling him marijuana, all caught on hidden camera. He thought a plea deal looked like his best bet. So, plead he did, to five charges of possession with intent to distribute marijuana and one charge of failure to stop for a law enforcement vehicle.

He was prepared for more than a slap on the wrist. Even though he was a nonviolent offender, it was his third marijuana arrest, which in South Carolina brought with it a mandatory minimum sentence of five years. The length wasn’t the only concern: By the letter of South Carolina law, Goodwin would have to be housed with mainly violent offenders, because third-strike weed distribution charges were not eligible for parole at the time.

But there was also reason to be hopeful. The sum total of all five weed sales was only 8.73 ounces, a trifling amount to justify putting someone away for half a decade. It was the sort of situation where a canny judge, understanding the situation, could have found some sort of work-around. “Five years was what they were saying in the beginning. I’m thinking, ‘It ain’t nothing but some weed,’” Goodwin told me via phone. “Even my lawyer was telling everybody weed was about to be legalized, it wasn’t anything serious.”

Judge Childs didn’t see it that way. After hearing the prosecution’s argument, she sentenced Goodwin to 12 years for his half a pound of cumulative marijuana sales. Because it was a non-parolable third-strike offense, that meant that Goodwin was compelled to serve a minimum of 85 percent of that sentence locked up with violent offenders: ten-plus years of hard time, regardless of good behavior. “I had more time than people in there who killed somebody. It was crazy,” said Goodwin. “For bullcrap.”

According to court documents obtained and reviewed by the Prospect, Childs’s harsh sentence came as a surprise. The Richland County Public Defender’s Office quickly filed a motion to reconsider the sentence, detailing “improper arguments, unfounded speculation, and incorrect legal assertions” by the prosecution.

“The assistant solicitor said that if the cumulative weight of the marijuana that [the] defendant was charged with selling on different occasions was added up, it would be the equivalent of trafficking marijuana and that the court should consider this,” the document reads. “This is simply incorrect. A defendant must be in possession of at least 10 pounds of marijuana to be found guilty of trafficking.” The prosecution, too, had, without evidence, “assumed that the defendant had been dealing drugs in larger quantities,” and made that a core component of a case, asking Judge Childs to consider the infraction tantamount to trafficking.

Childs’s record in the 2009 case would be distinctly at odds with the newfound commitment to criminal justice reform and smart-on-crime policies.