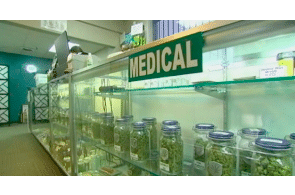 The Flandreau Santee Sioux Tribe operates the only medical marijuana dispensary in the state. Tribal officials say more than 100 people who have been issued tribal medical marijuana identification cards have been arrested since the store opened in July.

The State Department of Public Safety and the attorney general’s office have taken the position that the cards aren’t valid for people who aren’t tribal members. Flandreau Police Chief Zach Weber said his department is following that directive and arresting people with cards if they’re not tribal members.