Washington State has imposed a temporary ban on flavored THC vaping products in emergency legislation passed rapidly after the U.S. Centers for Disease Control and Prevention reported to have found a link to vaping and serious illness. 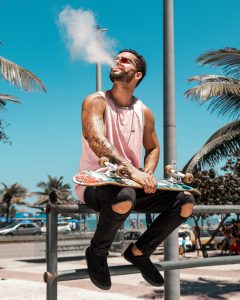 The emergency rule, following an executive order from the governor, was made the same day the CDC announced there was a possibility of a breakthrough in the effort to ascertain the cause of vape-related illnesses.

As reported by The Spokesman-Review, the ban is in place for the next 120 days. One cannabis vaping company filed a lawsuit against the state department of health, seeking at least a temporary restraining order to halt the ban. A judge denied the request, and it’s unclear whether the plaintiff vaping business will file an appeal. The next hearing in the case isn’t slated until February.

Youth Health Concerns Cited as Cause for Vape Ban

Officials with the Washington Department of Health defended their action, asserting it was necessary to do so immediately for the well-being and health of young people, who were putting themselves at risk for addiction and severe lung injury. Tobacco-flavored products are still available and legally sold – to adults.

Starting in January, no one under 21 will be allowed to purchase any vaping product in Washington state. All tobacco product sales will also be restricted to those over 21.

Authorities in Washington have reported 14 cases of vape-related illness and lung disease.

Health officials haven’t unequivocally pinpointed the cause, but CDC officials say new research seems to confirm a common link: vitamin E acetate identified 29 patient samples. Vitamin E acetate is a substance usually employed to dilute others, such as cosmetics. Health experts say that while it can be applied topically, it’s not meant to be inhaled. When it’s heated and inhaled from a vape pen, research suggests that it may release a type of toxic gas called ketene. It is this that has the potential to burn the lungs. Most of the samples the CDC tested were from products that also contained THC, but that’s almost certainly a coincidence.

California a Patchwork of Vaping Bans by Jurisdiction

As our Los Angeles THC vapor company attorneys can explain, most of the sales of these products containing this dangerous substance aren’t occurring in legitimate, licensed stores. They’re happening on the black market. Still, without clear labeling requirements from health officials, many marijuana vape manufacturers don’t disclose all the ingredients in their products. The state health board insists that is likely soon to change. There is already a proposal being drafted by state lawmakers for introduction as a bill next year.

In California, state health officials have issued warnings, urging people to stop vaping immediately and officials have begun cracking down on counterfeit and/or unlicensed sales. But thusfar, there has not been a statewide ban. Cities and counties, however, have implemented some of their own, leading to an even more complex web of marijuana regulation for businesses to follow. The Sacramento Bee reported at the end of September that roughly 50 jurisdictions in California have restricted or outright prohibited the sale of flavored tobacco and/or marijuana vape products. Los Angeles County passed its ban on flavored e-cigarettes and menthol cigarettes and is weighing calls to ban the sale of all vaping products.

The governor stated he did not have the authority himself to enact a ban on flavored vape products, but he has asked for funding to raise public awareness.