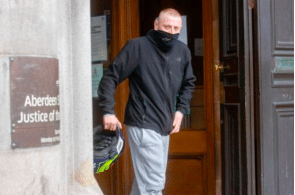 A scooter delivery driver has been banned from the roads after he was found to be driving with double the legal limit of cannabis in his system.

Craig Edgar, 35, was spotted driving through the centre of Ellon on his scooter with a passenger on the back when the police pulled him over.

When stopped and tested, Edgar gave a reading for cannabis that was more than double the legal driving limit.

His solicitor said a driving ban would have an impact on his ability to continue employment as a delivery courier.

Edgar pleaded guilty at Aberdeen Sheriff Court to one charge of having a higher than the legal amount of cannabis allowed in his system while driving.

Both men appeared to be under the influence

Fiscal depute Kiril Bonavino told the court that at around 11am police saw Edgar driving his scooter through Market Street in Ellon with a passenger on the back.

He said: “Both the accused and his friend appeared to officers to be under the influence and there was a strong smell of cannabis.”

Accused ‘failed to consider’ that drug might still be in system

Defence agent Michael Horsman told the court that, as a delivery driver, a driving ban would have a negative impact on his ability to continue in that line of employment.

He added: “He tells me that on the day in question he was off work and fully accepts that he had been smoking cannabis the previous evening.

“Regrettably, he failed to consider that it might still be in his system when he started driving his scooter.”

He added: “I have taken account of the fact that that was a lot of cannabis in your system and you have put yourself in a very difficult position, but I also have to protect the public.”

Sheriff Grant-Hutchison banned Edgar, of Oldyards, Auchmacoy, Ellon, from driving for a year.