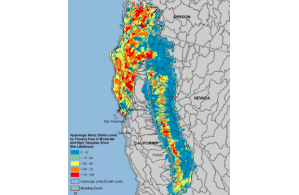 Illegal cannabis cultivation on public lands has emerged as a major threat to wildlife in California and southern Oregon due to the rampant use of pesticides, habitat destruction, and water diversions associated with trespass grow sites. The spatial distribution of cultivation sites, and the factors influencing where they are placed, remain largely unknown due to covert siting practices and limited surveillance funding. We obtained cannabis grow-site locality data from law enforcement agencies and used them to model the potential distribution of cultivation sites in forested regions of California and southern Oregon using maximum entropy (MaxEnt) methods. 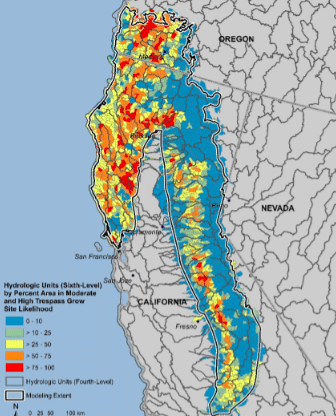 We ground-truthed the model by surveying randomly selected stream courses for cultivation site presence in subsets of the modeling region and found previously undiscovered sites mostly within areas with predicted high likelihood of grow-site occurrence.

Moderate to high-likelihood areas of trespass cultivation overlapped with 40 to 48% of modeled habitats of the three sensitive species. For the endangered southern Sierra Nevada fisher population, moderate-high likelihood growing areas overlapped with over 37% of modeled fisher denning habitat and with 100% of annual female fisher home ranges (mean overlap = 48.0% + 27.0 SD; n = 134) in two intensively studied populations on the Sierra National Forest. Locating and reclaiming contaminated cannabis grow sites by removing all environmental contaminants should be a high priority for resource managers.