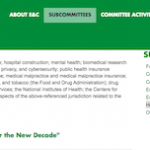 H.R. 171, the “Legitimate Use of Medicinal Marihuana Act” or the “LUMMA”

Rolling Stone provides the precis of each bill

H.R. 3884, Marijuana Opportunity Reinvestment and Expungement Act
Introduced last year by New York Democrat and House Judiciary Committee Chairman Jerry Nadler, the MORE Act notably passed that committee 24 to 10 last November, with two Republicans (Matt Gaetz of Florida and Tom McClintock of California) joining the 22 democrats who voted for the bill. The MORE Act would decriminalize marijuana and THC at the federal level by removing it from Schedule I of the Controlled Substances Act, which currently classifies it as an addictive drug that has no accepted medical use, akin to heroin. But it also has a strong focus on restorative justice for individuals and communities hit hardest by the War on Drugs. It would create an “Opportunity Trust Fund” at the Treasury to support a variety of programs such as “job training, reentry services, legal aid for civil and criminal cases, including expungement of cannabis convictions, literacy and health education programs, and youth recreation or mentoring programs.”

H.R. 2843, Marijuana Freedom and Opportunity Act
Similar to the MORE Act, this bill from Representative Hakeem Jeffries (D-New York) would also remove marijuana and THC from the list of Schedule I drugs and create a grant program for states and local governments “for marijuana conviction expungement programs.” Additionally, it would open up medical marijuana policies with “directives to conduct research on the impact of marijuana on the brain, the efficacy of medical marijuana, identification of additional medical benefits and uses of cannabis, and support highway safety research.”

H.R. 171, Legitimate Use of Medicinal Marijuana Act
This bill, introduced by Republican Morgan Griffith of Virginia, would reclassify marijuana as a Schedule II drug — meaning it has limited medical usage, but are still “dangerous” and have a high risk for abuse — so it primarily focuses on the regulation of medical marijuana. As it stands, because of its current scheduling, states that have OK’d medical marijuana are still technically running afoul of certain federal rules (same with full on legalization), but LUMMA would ensure that nothing in the Controlled Substances Act or the Federal Food, Drug and Cosmetic Act would “prohibit or restrict activities related to medical marijuana that comply with a state’s medical marijuana law.”

H.R. 3797, Medical Marijuana Research Act of 2019
The rules surrounding marijuana research in the United States are incredibly strict. As it stands, researchers are beholden to various protocols from several federal agencies — and three United Nations drug control treaties — that can both prolong the research process and hinder certain institutions, like colleges and universities, from conducting the kind of research they’d like to. On top of all that, even as marijuana manufacturing has boomed in the United States, all marijuana research must be done with product sourced from the sole place with a DEA license, the University of Mississippi (apparently their weed is genetically closer to hemp than anything on the modern commercial market). H.R. 3797, introduced by a bipartisan group led by Oregon Democrat Earl Blumenauer, addresses these two issues. It would streamline the research approval process, setting up a 30 day limit on decisions and centering registration around a single application from the Attorney General. It would also allow researchers to obtain weed from authorized private manufacturers.

H.R. 601, Medical Cannabis Research Act of 2019
Introduced by Florida Republican Matt Gaetz, this bill also addresses marijuana research restrictions, directing the Attorney General to “increase the number of federally registered cannabis manufacturers for research purposes.” It would also open up medical marijuana access to veterans, allowing Department of Veterans Affairs health providers to “provide information to veterans about federally-approved cannabis clinical trials, and to participate in such trials if registered under the CSA.”