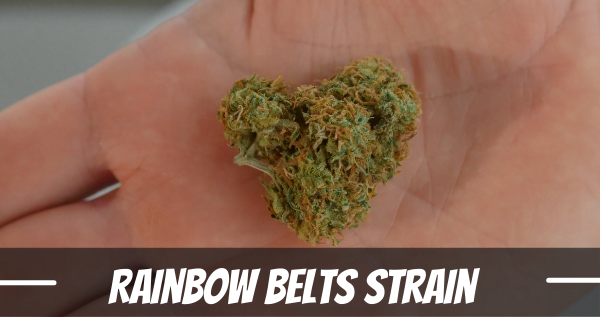 This hybrid strain provides all the best qualities you’d expect from a professionally formulated strain.

Taking a deeper dive into this Rainbow Belts strain info will surely get anyone’s mouth-watering.

Contrary to its name, the Rainbow Belts strain’s appearance doesn’t measure up to the psychedelic, technicolor images that come to mind when hearing the words “Rainbow Belts.”

The nuggets are a humble shade of green with small yellowy-orange pistils along the surface, coated in trichome crystals that soften their color.

Don’t let that fool you, though. When it comes to flavor, aroma, and effects, the Rainbow Belts strain certainly delivers on all fronts.

With Limonene and Caryophyllene, Rainbow Belts’ flavor is one of its greatest selling points by far.

As far as cost goes, you can expect the Rainbow Belts marijuana strain price to be around 300-400$ per ounce.

Rainbow Belts may not be the easiest strain to grow, but it’s not the hardest either (fortunately).

It will require your care and attention, but it makes sure to reward you for your efforts.

So, what is Rainbow Belts cannabis strain yield? Outdoors, you can expect around 10 – 15 oz/plant, whereas indoors, you’ll get roughly 1 – 2 oz/ft².

This strain is more than just flavor and fragrance.

The Rainbow Belts marijuana strain THC percentage measures around the 18-22% mark, and its effects are heavenly yet not too overpowering.

It’s a welcomed breath of fresh air for newly introduced cannabis enthusiasts who want to enjoy the benefits of a flavorful weed.

Whether smoking, vaping, or even edibles, Rainbow Belts sidesteps the overwhelming high of premier strains.

If plants have an energy of their own, the Rainbow Belts strain would have a gentle nature to it. Its flavors are inviting, and its scent is just as enticing.

Unlike many other strains that lure you in with fragrant promises just to completely decimate your senses, Rainbow Belts pot strain effects won’t leave you trapped in a tug-o-war between the will to search for munchies and the sheer strength of couch-lock.

The high comes on gently, flowing through your body in waves of euphoria and tingles, before settling into an uplifting sense of calm.

You’re very likely to be overcome with a mild case of giggles or talkativeness.

Rainbow Belts is wonderful for creative types who like to smoke to spur on some inspiration, so if you have an art project you’ve been waiting to dive into, consider taking some Rainbow Belts along for the ride.

Although this is a THC dominant strain, its CBD content (and its benefits) can’t be ignored.

Rainbow Belts weed strain reviews have shown it to be a favorite among users dealing with conditions such as stress, PTSD, fatigue, ADHD, and migraines, to mention a few.

It’s also useful for those combating insomnia and appetite loss.

No Rainbow Belts strain review could truly convey the delectable fragrances (and flavors) this strain puts out, though we’ll try our best.

Quickly growing in popularity, Rainbow Belts strain earns a top spot when it comes to aroma.

It boasts a powerful scent combination of tropical fruits such as grape, citrus, and blueberry with strong notes of sherbert and a presence of OG gas, making it a definite taste sensation.

Of course, getting high is fantastic, and we all love the feeling of the buzz coming on, sending sensations throughout your body, letting you know that the rollercoaster is about to drop.

But a great flavor to usher in makes it even better, which is exactly what the Rainbow Belts weed strain provides.

The flavorful aroma of Rainbow Belts is just a sample of what you can look forward to.

The Linalool and Limonene create its floral and citrus flavor, but these terpenes also encourage relaxation.

The Caryophyllene contributes to the light peppery flavor blended in amongst the taste of sweet berries and sherbert.

Newbies and first-timers should consider Rainbow Belts strain as their guide as they explore the cannabis landscape.

It offers the finest effects and benefits without the overwhelming highs accompanying most flavorful strains.

That’s not to say the Rainbow Belts cannabis strain doesn’t come with its own (and fairly common) adverse effects, though.

For starters, anyone who wants to dabble in weed recreationally needs to understand that dry mouth, thirst, red and dry eyes, and hunger are common occurrences.

The sooner you add snack planning and regular hydrating to your smoking routine, the better off you’ll be.

As for those with a low tolerance (or a tendency for over-indulgence): you could experience paranoia, brain fog, and a drop in blood pressure if you’re not careful, so take it easy.

Growing the Rainbow Belts strain requires some skill and may be slightly tricky for beginner growers.

Fortunately, Rainbow Belts strain seeds are available online if you want to try your luck.

Rainbow Belts seeds produce plants that grow on average 30″ – 60″ tall; however, outdoors, they thrive at up to 80″ high, so consider this when prepping your grow set-ups.

Download our grow bible for more on what you can do with all this Rainbow Belts strain grow info as well as what you’ll need to set up the ultimate grow and reap the best yields.

Good things are worth waiting for, and it’s no different for cannabis cultivation.

Rainbow Belts strain grow info suggests a flowering around 52 days in with proper love and attention, rewarding you with a fulfilling harvest around ten days after that. Totally worth it.

Archive Seed Bank bred the Rainbow Belts strain as part of the 200 plant breeding project, especially formulating it to bear some of the best qualities of its genetic lineage.

Rainbow Belts’ fragrance, flavor, and effects are the result of combining the sativa-dominant Zkittlez strain (for its citrusy/grapefruit flavor and euphoric high) with MoonBow #75 (which happens to be bred from Zkittles as well) for its skunky/candy taste.

Rainbow Belts strain is a hybrid strain meaning it contains genetics of both indica and sativa. Some sources claim a 70:30 indica-leaning ratio, while others say it’s a balanced 50:50 split. However, it inherited many of its sativa-like qualities from the Zkittlez’s side of the family.

What is Rainbow Belts strain yield?