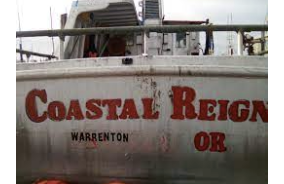 A year-long investigation into a deadly boat capsizing in February 2021 took a surprising turn as the U.S. Coast Guard released its findings in a town hall to the residents of Garibaldi, including members of the victims’ families.

“The totality of the circumstances in my opinion, was negligent,” said Capt. Christopher Coutu, a staff judge advocate for the U.S. Coast Guard. “I wanted the district commander to consider that and consider that and move it to the U.S. Attorney’s Office for prosecution.” 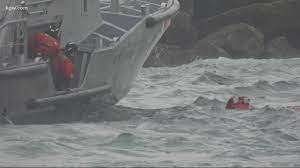 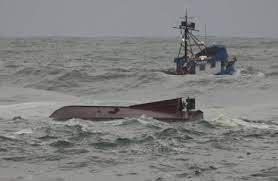 In February 2021, the Coastal Reign, a commercial fishing vessel, capsized while attempting to cross the bar at Tillamook Bay when returning from a days-long crabbing expedition.

The Coast Guard responded with rescue boats and a helicopter from Astoria, but two on the fishing vessel didn’t make it. Todd Chase and Zachary Zappone were killed when the boat capsized.

Investigators site survivor testimony and evidence found at the scene, saying marijuana was used by three of the four people on board, not including Chase but including the owner and operator of the boat Brandon Anderson, for a majority of the nearly 40-hour trip.

Investigators say one of the survivors told authorities they kept the use hidden from Chase while on the trip.

“The drug use and the last time they smoked marijuana was 30 minutes prior to crossing the bar,” said Coutu.

The Coast Guard found a variety of factors, including the drug use, fatigue — citing about two hours of sleep total during the trip, and a difficult crossing area with warnings in place, all led to the boat capsizing, which was being driven by Anderson at the time.

“Determined that it was a failure to properly navigate in and through the south hole, a dangerous area here in Oregon,” said Coutu, adding that two other vessels safely made the crossing in the hours before. “A reasonable mariner would have been able to do it and have, both before and after Mr. Anderson attempted to do it; marijuana use, fatigue.”

Since the Coast Guard is unable to pursue these charges directly, they’ve referred the case to the U.S. Attorney’s Office for prosecution, but so far, Anderson has not been charged for the negligence the Coast Guard says it found.

It’s something the victims’ family members expressed anger at during the Coast Guard’s town hall in Garibaldi Wednesday evening.

“If a person was smoking marijuana and driving down a highway and you take a life, that’s manslaughter,” a family member of Zach Zappone said during the meeting. “You have proof and evidence and this guy just gets to walk? Not fair.”

Family members added to KOIN 6 off-camera that they would like to see accountability for actions. The Coast Guard added that Anderson was not required to have a mariners license for a vessel of that size, and when brought in, he pleaded the fifth.

It doesn’t appear that the U.S. Attorney’s Office has made a decision on referring Anderson for criminal charges.

Following the meeting, KOIN 6 reached out to the office for more information but because it was already after hours, we have not yet heard back. The case is also being referred to the state’s district attorney’s office.