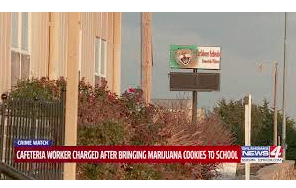 An Oklahoma cafeteria lady accused of bringing cookies baked with marijuana to teachers at an elementary school is facing charges.

Sarah Dailey, a 40-year-old cafeteria worker at Earlsboro Elementary, was charged with possession of a controlled substance with intent to distribute, the Daily Beast reported.

Police said the cookies, which were baked with THC butter, were given to two teachers at the school on Thursday, according to KFOR-TV.

The cookies made one of the teachers sick, police said, leading the other teacher to report the incident to school officials, the reports said.

“Guess she was trying to help them out,” Earlsboro Police Department Lt. Travis Sullivan told KFOR-TV. “In turn, one got sick and had to go home for the day, and the second one found out she got sick.”

KFOR-TV reported that Dailey said that she hoped the cookies would help the teachers’ stomach pains. She also told detectives that she thought they would consume them at home, not on school grounds, Sullivan said.

“What if a child would’ve gotten ahold of that,” Sullivan said to the news station. “It’s a safety thing.”

According to the outlet, the incident is under investigation and Dailey was booked at Pottawatomie County Detention Center following interrogation last week.