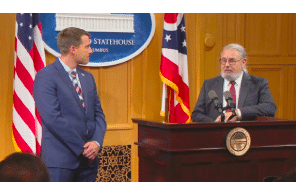 A pair of Ohio Republican lawmakers on Thursday filed a bill to legalize marijuana in the state. The move comes as activists are nearing completion of the first phase of their signature drive for a cannabis legalization initiative.

Reps. Jamie Callender (R) and Ron Ferguson (R) first announced their plan to push the legislative reform proposal in October and circulated a co-sponsorship memo to build support for the measure. Now they’re moving ahead with formal introduction of the “Ohio Adult Use Act.”

The bill would allow adults 21 and older to purchase and possess up to 50 grams of cannabis. They could also grow up to six plants, only three of which could be mature, for personal use.

Gifting up to 25 grams of marijuana between adult consumers without remuneration would also be permitted.

Adult-use cannabis products would be taxed at 10 percent. After covering administrative costs, tax revenue would be distributed as follows: 50 percent to the state general fund, 25 percent to combat illicit drug trafficking and 25 percent for substance misuse treatment programs.

The state Department of Commerce would be responsible for regulating the new adult-use marijuana and existing medical cannabis program and issuing business licenses through a new Division of Marijuana Control.

Regulators would be limited to approving one retail cannabis dispensary license per 60,000 residents in the state up until January 1, 2027. After that point, the department would would be required to review the program on “at least a biennial basis” to see if more licensees are needed.

The legislation does not contain specific provisions to promote social equity by expunging prior cannabis convictions or prioritizing licensing for communities most impacted under prohibition. That’s despite Callender saying in October that there would be a pathway for expungements “for folks that have prior convictions that would be not illegal after the passage of this bill.”