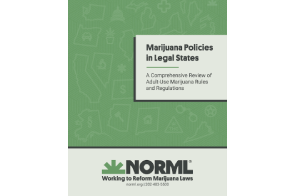 Marijuana policies in the United States have evolved significantly over time, particularly over the past decade with the passage of adult-use marijuana laws in over one-third of US states. As more jurisdictions abandon the failed policy of marijuana criminalization and its racially disproportionate enforcement, federal marijuana prohibition is becoming less tenable. Although the laboratories of democracy are still perfecting the laws and regulations governing the adult-use and sale of cannabis, it is nonetheless apparent that a growing number of state governments — as well as a majority of the public — believe that marijuana legalization is a preferable policy to criminalization.

The purpose of this report is to educate lawmakers on the policies that have been enacted in adult-use legalization states to regulate cannabis possession, production, and sales. Specifically, this report highlights policy trends as they pertain to seven distinct categories. Readers of this report will come away with a broad understanding of the vast landscape of marijuana laws and regulations that currently govern the state-licensed adult-use marijuana marketplace in the United States.