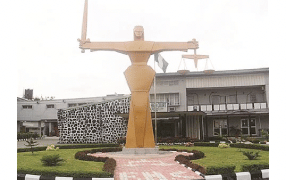 PM NEWS NIGERIA. with our favorite story of the week so far..

There was drama at Federal high court sitting in Lagos as the Nigeria Drug Law Enforcement Agency, NDLEA stormed the court with a pick up van loadedi with 45 bags of Cannabis Sativa popularly called Indian hemp.

The bags of Indian hemp brought to the court premises for inspection by by Justice Abimbola Olawumi Awogboro at the request of the NDLEA prosecutor Mr. J.I.Aernan in the as evidence in the trial of three persons John Ogunmefu 36, Idowu Adebayo 33,and Okoliko Andrew for alleged involvement in sale of illegal substances.

Others in attendance in the course of inspecting the bags of the weeds to ascertain are the counsel to the accused persons Barrister Prosper Ojakovo, the prosecutor Mr. J. I. Aernan, some NDLEA officials who brought the exhibit to court,and the court Registrar Mr.Joe Olutoye.

In a two count charge filed before the court by the prosecutor J.I. Aernan the three accused men were alleged to have sometimes in the year 2020 at Majidun Awori Ikorodu, a suburb area of Lagos state without lawful authority dealt in 566.244 kilogrammes of Cannabis Sativa.

After the inspection of the weeds park in a pick up van within the premises of the court,the presiding Judge Awogboro adjourned the suit till 4th of July,2022 for commencement of the trial of the accused persons will continue.

Drama as NDLEA storms court with 45 bags of Indian hemp