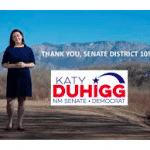 SANTA FE – Just weeks before a bill legalizing recreational cannabis in New Mexico takes effect, one of the new law’s primary legislative sponsors has announced she is opening a “full-service” marijuana law firm.

The disclosure by Sen. Katy Duhigg, D-Albuquerque, could renew debate over the state’s citizen Legislature – New Mexico is the only state that does not pay its lawmakers a salary – and prompt conflict of interest questions.

Duhigg said Tuesday the idea of a legal practice focused on the state’s new weed industry was not on her mind during this year’s 60-day legislative session and a special session called shortly thereafter, but emerged as a possibility in recent weeks.

“Certainly, had I been planning this when the bill went through I would have disclosed it,” Duhigg told the Journal.

She also said she would disclose her legal work on cannabis-related issues if bills dealing with the fledgling industry are proposed at the Roundhouse in coming legislative sessions, and would recuse herself from voting in the possible instance of a direct financial benefit.

But the first-term senator, a licensed attorney and former Albuquerque city clerk, pointed out many lawmakers who are not retired debate bills that deal with their livelihoods, including teachers voting on annual budget bills that largely set their pay levels.

“This is the inherent tension of having a citizen Legislature,” Duhigg said. “Unless only independently wealthy and retired people serve, we’re always going to be running into these issues.”

She said the best “fix” to the situation would be paying lawmakers for their work, an idea that has gained some traction in recent legislative sessions but has not been approved.

Currently, lawmakers get a $194 per diem payment aimed at covering daily food and lodging expenses for each day of legislative work and can also participate in a legislative pension plan, but are barred by the state Constitution from receiving a salary.

Specifically, Candelaria was the target of an ethics complaint filed in March by state Health Secretary Tracie Collins that accused the three-term senator of having a conflict of interest in his vocal opposition to a bill aimed at changing a patient definition within the state’s medical cannabis program.

Candelaria disclosed during this year’s session that he has represented Ultra Health LLC, the state’s largest medical marijuana producer, in court cases but has insisted he has followed all legal and ethical guidelines.

He said Tuesday that legislative leaders had dismissed the complaint, which was also dismissed by the state Ethics Commission in April for jurisdictional reasons.

Meanwhile, Gov. Michelle Lujan Grisham’s spokesman Tripp Stelnicki said Tuesday the governor’s administration would only raise concerns about a potential conflict of interest if a legislator, in the course of their work and legislative actions, gave reason to suspect a conflict might exist.

“Simply trying to make a living isn’t on its own something you can say is problematic, especially because we have a citizen Legislature, a point I know the speaker has made in the past,” Stelnicki told the Journal.

The bill passed by legislators during the two-day March special session called by Lujan Grisham included an amendment sponsored by Sen. Stuart Ingle, R-Portales, that bars lawmakers from seeking cannabis production or retail licenses until July 2026.

But the amendment does not prohibit legislators from working on cannabis-related issues, including as attorneys.

Duhigg, who was the top Senate sponsor of the bill during the special session, said her new law firm – she opened it along with a partner – will focus on helping smaller cannabis start-ups apply for microbusiness licenses, deal with zoning issues and more.