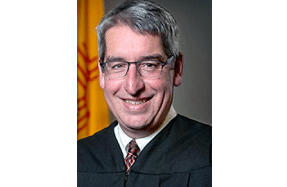 A legal battle has emerged between a New Mexico cannabis business and the agency tasked with regulating cannabis production and sales after state regulators reportedly found mold in some of the company’s products.

First Judicial District Court Judge Bryan Biedscheid, during a hearing on Tuesday, ordered the Cannabis Control Division to allow Sacred Garden to sell manufactured products, which both parties agreed would not have been affected by the mold that was reportedly found.

Biedscheid said on Tuesday that “the appropriate court order” he could issue at the time was to allow Sacred Garden to sell manufactured products that are “thought to be safe by virtue of the process involved.”

Biedscheid also took issue with the reason that regulators had not been back to Sacred Garden’s facility to determine if the reported mold problem had been resolved. Kevin Graham, deputy general counsel for the New Mexico Regulation and Licensing Department, which oversees the Cannabis Control Division, initially told Biedscheid that the division cannot send a qualified inspector to Sacred Garden’s facility until early next week.

“One of the reasons we said we needed until Monday in order to be able to come back out to the facility was that we have one staff member who’s particularly qualified to assist in that type of examination,” Graham told Biedscheid. “He’s out of town on vacation, which, you know, employees get to take some time off every once in a while.”

Sacred Garden’s attorney, David Foster, told Biedscheid that the facility that the division shut down is key to the company’s operation. Because state regulators froze the company’s access to the state’s tracking software and 95 percent of Sacred Garden’s supply comes from that facility, Foster said, the entire company is at risk of shutting down.

“They’re about to be out of product to sell, I would say by tomorrow at the latest,” Foster said.

Biedscheid gave the Cannabis Control Division another day to review an updated independent test from Sacred Garden and said he wanted to balance public safety with the prosperity of the cannabis business.

“We’ve got two issues here,” Biedscheid said. “One is speed to mitigate any harm to this company, in terms of a determination and an open-ended ‘Well, maybe things will work out when people come back from vacation,’ in the current environment isn’t cutting it.”

Biedscheid gave Graham until Thursday morning to respond to the latest test Sacred Garden commissioned and said he was prepared to schedule another timely hearing if needed.

“I’m not comfortable saying that I’m going to override the department, and it’s going to go to retail,” Biedscheid said. “But I’m just very concerned about the lack of urgency I’m getting, and I understand that we live in a world that’s short-staffed quite often.

Sacred Garden’s request for an injunction came after the Cannabis Control Division mandated a recall on several of the company’s cannabis flower strains. On March 24, the division issued Sacred Garden a cease and desist letter calling on the company to shut down one of its key facilities after the division reportedly found mold in some of the company’s products. According to a press release issued the next day from the Regulation and Licensing Department, the test for mold was spurred by a complaint filed with the Cannabis Control Division, by a medical cannabis patient.

In its request for an injunction and through Foster’s arguments during Tuesday’s hearing, Sacred Garden maintains that the general mold and yeast test that the Cannabis Control Division conducted is no longer a required test under the division’s own rules. The division does, however, require tests for Aspergillus, which is a type of mold that can be harmful for those with a weakened immune system. Sacred Garden’s request for an injunction cited guidance from the Cannabis Safety Institute which states that all plants, including cannabis, can be a “host to many mold species,” but that some of those species are “ubiquitous” and may not present serious health risks.

Graham argued during Tuesday’s hearing that the control division, by law, is allowed to issue a cease and desist order if “an imminent health hazard may exist.”

“If you review the cease and desist letter, it nowhere says that we have found Aspergillus mold,” Graham said. “It does identify that there have been tests for mold throughout the facility.”

While the cease and desist letter does cite an “unsanitary and unsafe working environment” and “mold growing on equipment, walls and ceilings throughout the facility” as reasons the Sacred Garden facility was ordered to close, it also cites high levels of “yeast and mold,” without specifying the types.