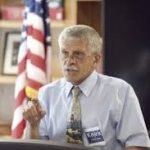 Marijuana would be sold in state liquor stores under a proposal a House committee heard on Wednesday.

House Bill 1663 would legalize retail marijuana sales as surrounding states have done but would not allow advertising or other enticements.

“This would not allow a retail market outside of the liquor stores,” he told the House Criminal Justice and Public Safety Committee Wednesday. “My local paper the Daily Sun in Conway has full page ads from the stores in Maine.”

Under the bill, a person would have to be 21 or older to purchase marijuana, the same age limit as alcohol sales.

The bill was opposed by the New Hampshire Association of Chiefs of Police, New Futures, the Roman Catholic Diocese of Manchester and others.

“This is legalization and commercialization whether the store is a New Hampshire liquor store or anywhere else,” said Bedford Police Chief John Bryfonski, representing the police chiefs’ association. “We have medical marijuana and decriminalization, so no one is going to jail for marijuana.”

Where marijuana has been legalized, Bryfonski said, there has been a dramatic increase in those operating vehicles under the influence and in the percentage of fatal crashes.

He said two fatal crashes in his community recently both involved drivers under the influence of marijuana.

There is no road test for recent use of marijuana, Bryfonski noted, and no standard for intoxication in New Hampshire.

And while supporters say it helps eliminate or reduce the black market for drug sales, the states that have legalized retail sales have seen black market sales surge.

And he said, in every state that has legalized the drug, the estimate of potential revenue generated has been less than anticipated.

Under the bill, sponsors believe state revenue would be between $15 million and $36 million annually.

The bill would have two oversight agencies, the liquor commission and the cannabis control commission established under the bill.

The two agencies would determine what products would be sold in state liquor stores that could include various strains and potencies of cannabis, buds, baking material and lollypops, according to Knirk.

But committee member Rep. Linn Opderbecke, D-Dover, said in the past legal issues were raised over marijuana sales at state liquor stores. And he asked if Knirk had approached the liquor commission about his proposal.

Knirk said he had not approached the commission and does not know where it stands.

He said he was not aware of the legal problem but believed there may be a “work-around.”

Former Rep. Dr. Joe Hannon of Lee said he served on the commission that studied legalization and taxation and at the time the commission was in favor of selling marijuana in the stores but noted that was several years ago.

Bryfonski told the committee liquor stores should be allowed to opt out of selling marijuana if a community objects.

He noted the police chiefs do not stand alone in opposing the bill as all major public health organizations in the country oppose legalization because of the physical and mental health risks from use.

New Futures, which promotes improved health and wellbeing through areas such as alcohol and other drug use, early childhood, access to treatment, and children’s behavioral health, opposed the bill saying it is not a responsible model for retail marijuana sales.

“This bill does not go far enough to protect the health of children,” said the organization’s lobbyist Kate Frey. “There may be no marketing or advertising, but there is no limit on sales or the type or products.”

She was also concerned the funding earmarked for treatment would not be used for that purpose just as the alcohol treatment fund was used for other purposes.

“The movement to retail sales is new to all of us,” Frey said and urged lawmakers to look at how Rhode Island is approaching legalization, “highly regulated and only in state stores as well.”

“There are responsible ways to do it,” Frey told the committee.

The committee is expected to decide Thursday morning on what recommendation to make on HB 1663.

The committee has already voted to recommend another bill that would allow for the cultivation and possession of small amounts of cannabis.

House Bill 1648 would allow those 21 years or older to possess up to three-quarters of an ounce of marijuana, five grams of hashish, and other cannabis-infused products.

The bill would allow adults to grow up to six cannabis plants at home and to process the plants.

Adults would be able to give cannabis and up to three immature plants to other adults under HB 1648.

The bill would allow New Hampshire residents to purchase cannabis in Maine, Massachusetts or Vermont, where retail sales are legal, and bring it home.

But the bill leaves in place statutes prohibiting commercial sales, sales to a minor or operating a vehicle under the influence of the drug.

The committee voted 13-7 to approve the bill with an amendment but the House has yet to vote on the bill.