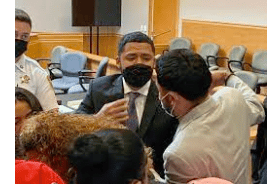 Jun. 21—A Hillsborough County jury found an admitted Manchester marijuana dealer innocent of shooting and killing a 17-year-old who was part of a team of four males that invaded the man’s home, beat him and tried to steal his cache of drugs and money.

Isaiah Rivera-Perez, 25, embraced his defense attorney and wept as the jury announced late Monday afternoon that he was innocent of second-degree murder. Rendered after only a few hours of deliberation, the verdict capped a five-day trial in Hillsborough County Superior Court.

The jury did find him guilty of felony reckless conduct, for shooting a gun in his Central Street neighborhood and putting residents at risk.

Rivera-Perez’ family attended the entire trial. They cried when the verdict was read and later encircled him and took turns embracing him. His mother fainted at one point.

“The only message I want to send is I’m an innocent man, and I want to live my life to take care of my children and my family,” Rivera-Perez said. His message to the family of the dead teenager: A tragedy took place two years ago and he’s not a monster.

According to testimony, Rivera-Perez was selling marijuana and marijuana-edibles out of his home at 276 Central St.

On July 14, 2020, he let in a customer to sell him some edibles. The customer asked to use the bathroom, and then let three members of the OTB gang into the home.

One pistol-whipped Rivera. One held down his legs. One held a gun to his wife’s head. One rifled through his belongings, looking for drugs and money.

When they started to flee, Rivera-Perez grabbed his gun. He claimed he shot at the four from his porch. He struck Jaden Connor, who ran a short distance and collapsed.

The verdict comes as Manchester police have instituted an effort to address gun violence in the city. Police Chief Allen Aldenberg was on hand for the verdict but quickly left the courtroom without commenting.

Rivera-Perez claimed self- defense, but prosecutors said the law of self-defense does not allow one to shoot someone in the back as they are running away. The law allows self-defense if a person believes he is about to be attacked.