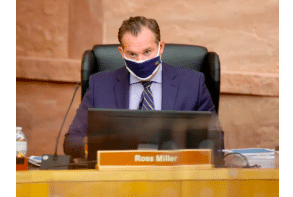 A Clark County commissioner who questioned how an unfinished marijuana dispensary breezed through licensing hurdles at a site just off the Strip has been hit with a state ethics complaint.

But the commissioner, Ross Miller, isn’t backing down.

Miller called the complaint “absurd and fanciful” Friday and said he will continue to press for answers about how the dispensary, Thrive Cannabis Marketplace, was able to get a business license without a public hearing.

“I won’t be silenced by their intimidation tactics,” Miller said. “All I’ve done at this point is ask questions about how this might have happened, as any member of the public might do. This just shows me that there might be something that we need to get to the bottom of.”

Dennis Prince, the lawyer for Cheyenne Medical, LLC, which owns Thrive, filed the ethics complaint against Miller on Thursday. The complaint accuses him of making defamatory comments about the business and having “extensive conflicts of interests” because Miller’s law firm once sued Thrive and represented a dozen of the company’s competitors.

Miller, a lawyer and former Nevada secretary of state, had raised concerns about the regulatory process involving Thrive. The dispensary site, at 2975 Sammy Davis Jr. Drive, is next door to topless club Sapphire Las Vegas.

The commissioner said Friday that he first asked questions within the county government about the dispensary’s case in December, but still hasn’t received any answers.

Prince said the complaint is related to Miller’s participation in a high-profile 2020 trial stemming from the suit involving Thrive. Miller had dubbed the trial “World War Weed” in the media.

“Mr. Miller used his status as an elected official to injure Thrive, mislead the public, and advance the pecuniary interests of clients that he represents in a private capacity,” Prince said in a letter to County Manager Yolanda King, informing her about the ethics complaint.

“This is a gross conflict of interest that completely undermines Mr. Miller’s integrity and impartiality as a public officer.”

Ross Armstrong, executive director of the Nevada Commission on Ethics could not be reached for comment.

Prince called for Miller to abstain from future commission votes relating to Thrive and all matters involving the cannabis industry. Prince also demanded Miller recant the statements he made about Thrive in the Review-Journal story and on social media. 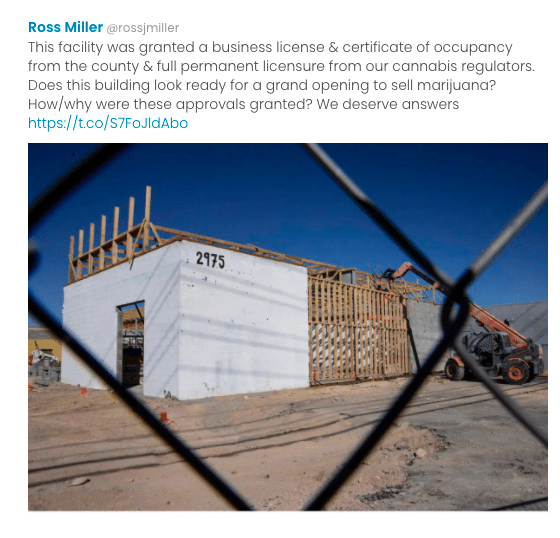 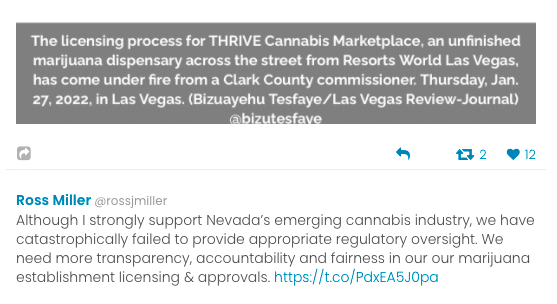