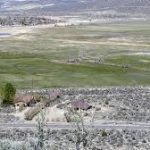 A Nevada hemp grower is suing Carson City for trying to block a cannabis farm on about 100 acres (40 hectares) of rural property owned by the city.

The Reno Gazette Journal reports Tahoe Hemp LLC filed a lawsuit in state court Jan. 15 accusing the city of acting in bad faith by breaching a contract with the property’s former owner.

The Carson City Board of Supervisors voted Jan. 16 to authorize the district attorney to take legal action if necessary against Tahoe Hemp, according to the Nevada Appeal.

The board said some of the open space was purchased by the city in 2010 partly with money obtained under a state land grant that prohibits any use of the land other than ranching or preserving open space, cultural or wildlife resources.

Tahoe Hemp wants to grow its crop on a portion of the former Buzzys Ranch, a popular public hiking and outdoor recreation area adjacent to the Carson River, according to the Gazette Journal.