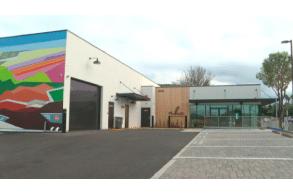 The Natural Healing Center (NHC) is suing the City of San Luis Obispo and the City Council for terminating its cannabis operator permit.

In October, the city notified NHC that its permit had been terminated and it would not be allowed to open a cannabis storefront in the city.

City officials said the permit applicant, Helios Dayspring, submitted false or misleading information about his criminal misconduct in the application. Specifically, he reportedly told city officials that he never spent money for illegal purposes, falsified any documents, or was involved in tax fraud or evasion.

NHC’s lawsuit, filed in San Luis Obispo Superior Court, claims the city did not follow the proper ordinance when terminating NHC’s permit. It argues that the city used an ordinance regulating cannabis permit applications, and since the permit had already been issued, that ordinance should not apply. Instead, it says the city ordinance governing permits requires a hearing before termination, which NHC did not receive.

The lawsuit also claims that Dayspring was no longer a part of NHC when the permit was issued, having transferred his interest in the business to current CEO Valnette Garcia the year prior.

Dayspring is reportedly still the owner of the building at 2640 Broad Street where the NHC retail shop was to be located.

The lawsuit claims Dayspring has spent approximately $4.1 million to build out the retail space and NHC has spent another $520,982 preparing to open up shop. It says, “termination has forced Petitioner (NHC) to now face substantial economic liabilities that will likely bankrupt Petitioner and its owner.”

The lawsuit asks that the permit be reinstated and NHC be allowed to open for business in San Luis Obispo.

San Luis Obispo City Attorney Christine Dietrick released a statement Thursday in response to the lawsuit, saying, “Despite the lawsuit, the fact remains that during the permit application process, Natural Healing Center provided the City with false or misleading information about criminal misconduct. We are committed to a fair and transparent process that provides a level playing field for commercial cannabis companies in our city. The automatic termination is the sole result of misrepresentations about Dayspring’s criminal misconduct in the application process that were in the exclusive control of NHC and its stakeholders. The City remains confident that its actions were appropriate, legally well-supported and consistent with the City’s clearly articulated rules.”

Meanwhile, Dayspring is scheduled to be sentenced in federal court on Feb. 11, 2022.

He faces a maximum sentence of 13 years in prison, three years probation, and a $500,000 fine. Plus, he could be ordered to pay nearly $3.5 million in restitution to the IRS.