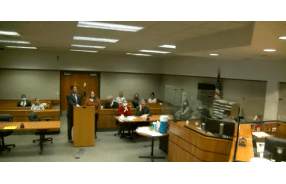 FLINT, MI – A Mt. Morris Township woman was arraigned Wednesday, May 4, on one felony count of second-degree child abuse after authorities said she left her marijuana-infused edibles in a place where her six-year-old child grabbed them and shared them with classmates, an incident that left a handful of students hospitalized.

Melinda A. Gatica appeared before Genesee County District Court Judge William H. Crawford Wednesday morning and pleaded not guilty to the charge. She turned herself in prior to the hearing.

Paul Scott, Gatica’s attorney, asked for a personal recognizance bond, which was granted by Crawford. Stipulations for Gatica’s $25,000 bond include no marijuana, marijuana products, alcohol in the home and she must undergo random drug testing.

“We understand the allegations. She understands how serious this is. She wanted to come in right away and answer to the court,” Scott said. “I can tell you my client is shaken to the core about this.”

Second-degree child abuse is a 10-year felony, if convicted.

However, Genesee County Prosecutor David Leyton said during a Facebook live video Tuesday, May 3, that the outcome of the case may not reflect that.

“That doesn’t mean it’s going to end up that way,” Leyton said. “We’ll make hopefully a learned decision as to what the case should result in. But the most important thing is this not happen again in our community.”

The woman’s charge stems from an investigation prompted by more than a dozen students reportedly feeling ill Friday, April 29.

First responders were called to Edgerton Elementary school around 1 p.m. that day in response to the students reporting to their teacher that they felt ill.

The school building of more than 400 students was evacuated as another form of caution. The school reached out to parents to notify them of the situation.

The symptoms shown by the students – nausea, lethargy, and lightheadedness – mirrored those indicative of carbon monoxide poisoning, or what one may feel if there was a gas leak, Genesee County Sheriff Chris Swanson said at the time.

In a letter published online on Saturday, April 30, Spears stated that further investigation had led authorities to believe that the students may have ingested a foreign substance that led to the illnesses.

According to the letter, five kindergarten students from one classroom were transported to Hurley Medical Center in Flint.

Through its investigation, the sheriff’s office became aware of the woman. In announcing it was charging her, authorities said the woman left marijuana edibles in a LifeSavers package on a shelf inside her refrigerator.

Her six-year-old child then took them to school and other students ingested them.

The woman purchased liquid THC in 2021 and made her own marijuana-infused gummy edibles with up to 30 milligrams of THC per gummy, Swanson said.

Leyton said that while it is legal to infuse and create your own marijuana edibles, the woman erred when she left the gummies out where her six-year-old child could access them.

Scott said they are working with the prosecution to “try and resolve this matter in the best interest of everyone involved.”

“However the incident is being characterized, she is an outstanding mother,” he said, adding Child Protective Services has not petitioned to have Gatica’s children.

A probable cause conference has been scheduled for Thursday, May 12.