Four states have already begun taxing and regulating the recreational use of marijuana. Based on current ballot initiatives, fights to legalize marijuana in other states will only grow by the time the 2016 elections roll around.

Gallup points out that a majority of Americans supported legalized marijuana for the first time in 2013. Since then, the battle to legalize pot has expanded from just a popular idea among liberal, coastal states. Now, in traditionally red states like Arizona and Missouri, marijuana legalization may soon come up for a vote.

Despite the fact that the 2016 election cycle is still a year and a half away, a number of states are taking steps toward approving marijuana taxation and regulation ballot initiatives:

Nevada has already approved a measure that will be added onto the state’s 2016 ballots. It would tax and regulate marijuana like alcohol for recreational or medical use. Colorado, Alaska, Oregon, and Washington have all legalized state marijuana markets as well.

Arizona and Maine are working to get enough signatures on petitions for their ballot initiatives. Both states would put a measure on the ballot that would aim at taxing and regulating the sales of marijuana like alcohol. Arizona needs 150,000 voter signatures for their initiative to land on the ballo, while Maine needs 61,000.

Quite a few proposals and pieces of legislation are being pitched in California. But, marijuana advocates and lobbying groups are also working on the language for a measure similar to Colorado’s from 2012 for both California and Massachusetts.

In Michigan, another marijuana legalization initiative is being considered for the state’s ballots. The MILegalize petition would permit commercialized marijuana for medical and non-medical uses with a 10% tax, a certain amount of homegrown plants, and allow gifting between adults.

It’s not just states with legalized medicinal use of marijuana that are considering opening their doors to the recreational pot market:

Although the “Show Me” State has yet to legalize any form of marijuana, a “Show-Me Cannabis” petition has started pushing for signatures to get an initiative on the ballot. The measure, if approved, would tax and regulate pot like alcohol, and allow individuals possession of 1 ounce of extracts, 16 ounces of edibles, 20 ounces of liquids, 6 marijuana plants, and 12 ounces of usable marijuana. It would also call for the expungement of past criminal records regarding marijuana, and tack on a medical marijuana program.

Lastly, an initiative in Florida is likely to make it onto ballot for a second time, petitioning for a constitutional amendment that would legalize marijuana for Floridians with “debilitating medical conditions.” In 2014, the ballot measure got 58% of the vote. It needed 60% to win.

The fight to legalize marijuana doesn’t end with these eight states. At least 20 state legislatures across the country will consider marijuana decriminalization, and legalization for medicinal and recreational use. 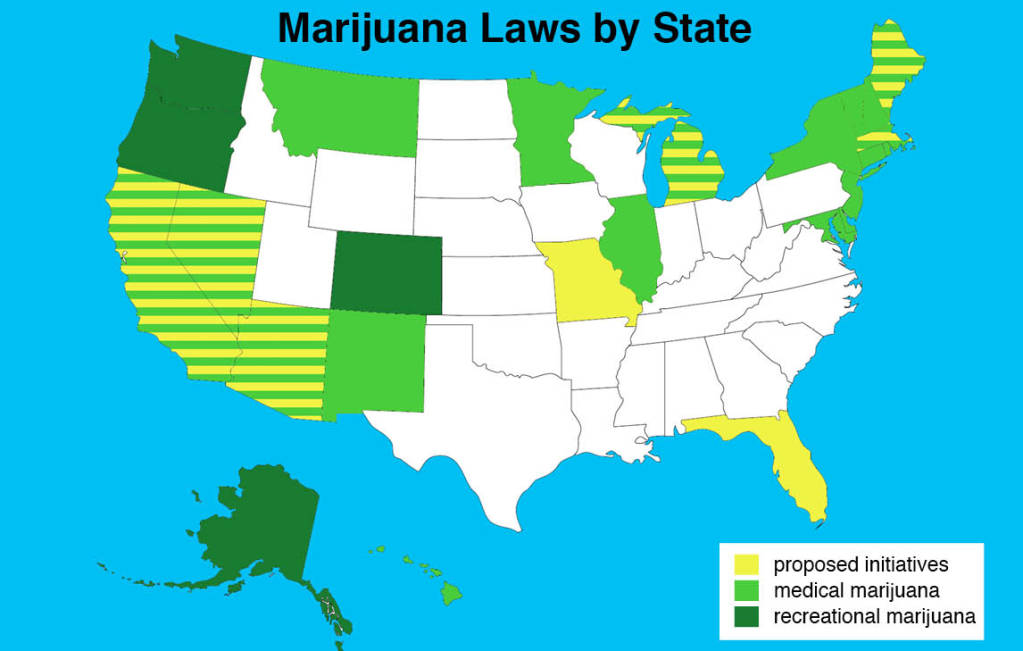 The lead-up to the 2016 primaries is in full swing, with another candidate declaring seemingly...view more