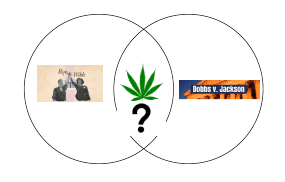 “None of these rights has any claim to being deeply rooted in history,” Alito wrote in the draft, which was first revealed by Politico.

What the justice seems to be saying is that, if Roe v. Wade were to stand, it could invite further legal challenges over issues where government policy is seen as interfering with the autonomy of individuals, potentially rendering it unconstitutional to prohibit people from using illicit drugs, for example.

Alex Kreit, a legal expert who specializes in drug policy and teaches at Northern Kentucky University, told Marijuana Moment that the argument isn’t without precedent, though it hasn’t had much success in the courts to date.

Douglas Berman, a law professor at Ohio State University, told Marijuana Moment that he has “long thought there could be potent arguments for constitutionally protected rights to use a drug for health need if there are no externalities.”

“Such arguments have never gotten any traction in courts, but I agree with the notion that taking privacy/autonomy rights serious could get you there,” he said.