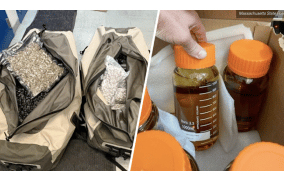 Some people are just incapable of learning the lesson the first time round!

A Maine man who was arraigned for driving without a license and illegal possession of over a pound of marijuana was arrested again as he drove off from Massachusetts courthouse in an SUV full of 90 pounds of pot in different forms.

Yves Duboc was released from Newburyport District Court Wednesday under the condition that he didn’t drive until he got his Maine driver’s license, which was suspended.

As the 43-year-old from Biddeford left the courthouse, a Massachusetts State Police trooper watched him get into a Toyota SUV with a Florida license plate and drive off. Duboc was pulled over and once again arrested for driving without a license, state police said.

After handcuffing Duboc and putting him in the back of the police cruiser, the trooper searched the SUV. In the passenger compartment, the trooper found zip lock baggies, a bong, two large vacuum sealed bags and two duffel bags filled with marijuana, five large jars of THC extract and a large roll of $20 bills rolled up in a rubber band.