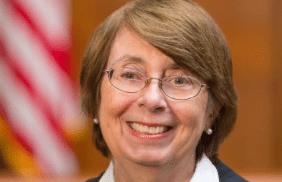 The First Circuit gave strong indications Thursday that it would strike down a Maine law that says only in-state residents can own for-profit medical marijuana dispensaries.

Maine’s defense of the law hinges on marijuana’s continued status as illegal at the federal level, saying this means there can be no national market for cannabis. The law was challenged as discriminatory, protectionist legislation that violates the Commerce Clause.

“There’s some irony in saying the market is illegal when your state and 33 other states have entered the market, and you’ve not just entered it but regulated it in a way that discriminates against other states. That’s a basic flaw in your approach here,” Lynch said.

Taub readily conceded that the goal of the law was “to promote local business” but said “the point is not whether this is fair or not, or equitable,” but whether Maine can get away with protectionism due to the federal prohibition.

“No,” Lynch responded. “You’re asking us to say that Congress’ intent is that there be no market while Maine is busy exploiting the market. That’s enough.”

As cannabis becomes big business across the country with weed companies publicly traded on Wall Street, a number of states have passed laws to try to retain a local flavor — or, depending on how you look at it, unfairly help their own citizens at the expense of out-of-staters. A few courts have held that that’s unconstitutional, but this is the first time the issue has reached a U.S. Court of Appeals, so the decision will have a big impact on the future of the marijuana marketplace.

The 2018 Maine law says that officers and directors of for-profit medical dispensaries must live in the state. A company called Northeast Patients Group owns three such dispensaries and wants to sell its business to High Street Capital Partners LLC, a Delaware corporation. So it filed suit.

A lower court struck down the law, and an appeal was filed on behalf of the state and a group of Maine pot sellers.

The Mainers argue that the point of the Commerce Clause is to protect free trade in the national marketplace, but there is no national marketplace for pot because it’s illegal at the federal level. “What we have is 33 isolated silo markets, not a common market,” said James Monteleone of Bernstein Shur in Portland, who argued for the local pot sellers.

But the plaintiffs say that’s not true because there is an interstate market for investment in marijuana businesses. They also note that, while pot is nominally illegal, Congress passed the Rohrabacher Amendment that prohibits the federal government from interfering in state marijuana markets. The government has also required pot sellers to pay taxes, comply with rules set by the Occupational Safety and Health Administration, and follow banking regulations. Finally, although the measure appears to lack enough votes to pass the Senate, the U.S. House of Representatives passed a bill on April 1 to completely decriminalize