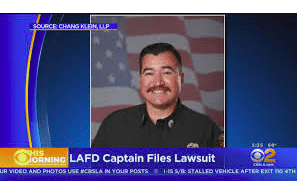 A Los Angeles Fire Department captain severely burned in a May 2020 explosion inside a downtown L.A. warehouse has sued the owners of the building and a vaping supply shop housed there, accusing them of hazardous activity, premise liability and negligence.

Victor Aguirre and his wife, Claudia Aguirre, filed suit Wednesday in Los Angeles County Superior Court against property owner Steve Sungho Lee and his various companies along with the operators of Green Buddha and Smoke Tokes, a smoke and vape shop inside the East 3rd Street warehouse where the explosion occurred. Twelve firefighters were injured.

After a criminal investigation by the federal Bureau of Alcohol, Tobacco, Firearms and Explosives and the Los Angeles Police Department, they were charged with more than 300 criminal counts.

The lawsuit claims Victor Aguirre, a 20-year veteran of the Fire Department and father of two, suffered catastrophic injuries in the explosion, including severe burns over much of his body and “devastating third-degree burns” to his hands. The burns resulted in so much damage that each of his fingers had to be partially amputated, and he has undergone 25 surgeries since. He was hospitalized for two months and has been able to return to the Fire Department in an administrative capacity.

Aguirre, according to the suit, has been permanently disfigured, disabled and left with a lifetime of pain and suffering. The suit accuses the warehouse owner and operators of the vape shops of violating the law, storing large quantities of hazardous materials in an illegal and unsafe manner, maintaining them in an “ultrahazardous condition” and negligently summoning Aguirre and other firefighters to the scene.