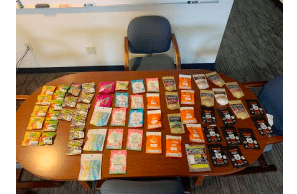 Police said the products were labeled as Delta 8 and Delta 10, which are legal in Kentucky, but that they tested positive for Delta 9 marijuana, which is illegal.

The Henderson Police Department says it has seized over $30,000 worth of marijuana products from businesses around the city.

HPD said its investigation began after a tip was made in July about the sale of marijuana at multiple businesses around Henderson, Kentucky.

The department says the products in question were labeled as “Delta 8” and “Delta 10,” which are not illegal in Kentucky. Police say the products they were investigating included vape cartridges and gummies, and that the gummies looked like children’s candy.

HPD says that after researching the products, members of the department performed controlled buys at 10 locations throughout Henderson and that each product that was purchased field tested positive for Delta 9 marijuana, which is illegal in Kentucky.

Police believe that the products were intentionally mislabeled to deceive the businesses and law enforcement.

HPD says that beginning on Oct. 26 and continuing until Nov. 10, members of the department seized over $30,000 in marijuana products.

The investigation remains ongoing at this time. 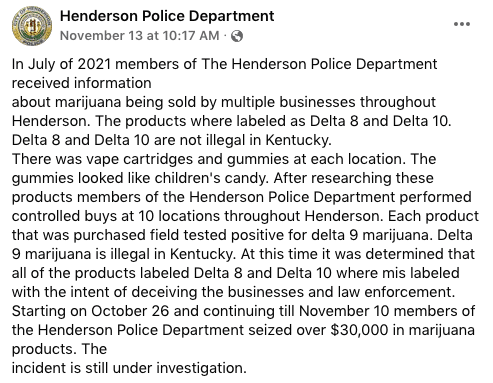