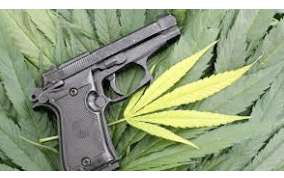 The Justice Department is doubling down on its claim that medical marijuana patients are uniquely dangerous and, therefore, unfit to possess firearms—and it’s now comparing cannabis consumers to domestic abusers with a “propensity” toward violence.

In a new court filing, DOJ responded to a lawsuit from Florida’s agriculture commissioner, who is alleging that federal policy barring medical cannabis patients from the right to own firearms is unconstitutional. The department disputed a series of claims made by the plaintiffs and is requesting that the court dismiss the case or issue a summary judgement.