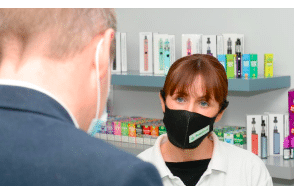 Mother of-two goes all the way to the High Court to fight Irish ban on THC after cops raid her shop and seize €1,500 worth of product

MEET the mum-of-two waging a ‘David vs Goliath’ High Court battle against the State over the absolute ban on the sale of products containing minuscule amounts of THC.

Denise Lynch’s business, D Hemp Shop, in Cootehill, Co Cavan was raided by gardai under the Misuse of Drugs Act on September 24 and €1,500 worth of products were seized.

She was also warned she now faces prosecution for selling products containing 0.2 pc THC – the psychoactive constituent in cannabis – under the same laws used to target cocaine and heroin dealers.

But instead of raising the white flag and closing down, Denise decided to fight back and is suing the Health Minister Stephen Donnelly, the Garda Commissioner, the Attorney General and the Government of Ireland – arguing Ireland’s 1977 Misuse of Drugs Act contravenes EU regulations pertaining to the sale of THC.

Represented by Micheal O’Higgins SC, Denise will claim that EU regulations allow products with trace amounts of THC to be lawfully traded within the block.