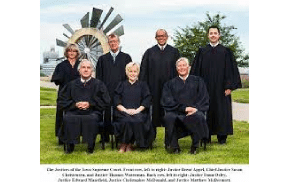 An Arizona woman’s medical marijuana card does not permit her to possess the drug in Iowa, even though she had to obtain a doctor’s authorization to have it, a divided Iowa Supreme Court ruled Friday.

The 4-3 decision leaves in place a conviction for marijuana possession, a serious misdemeanor, for Pamela Middlekauff, 55, and sets a precedent for other people arrested in Iowa for drug use or possession that might be legal in their state of residence. Chief Justice Susan Christensen wrote for the majority, while Justice Edward Mansfield wrote a dissent.

According to court filings, Middlekauff was stopped for speeding while driving through Warren County in December 2019, and the officer smelled marijuana in the car. Middlekauff, who has osteoarthritis and other painful musculoskeletal conditions, told the officer she not been smoking but had “quite a bit of marijuana” and showed him the medical marijuana registry card she was given by the Arizona Department of Health Services in 2018.

Prosecutors charged Middlekauff with possession, and she was convicted at trial after the court ruled she could not present evidence about her medical marijuana card.

Key to her appeal is an Iowa law making it illegal to possess a controlled substance unless that substance was “obtained directly from, or pursuant to, a valid prescription or order of a practitioner.” To receive her Arizona registry card, Middlekauff had to present a doctor’s diagnosis and attestation that she was “likely to receive therapeutic or palliative benefit” from medical use of marijuana.

Before the Supreme Court, Middlekauff’s attorney argued that constituted a prescription. None of the seven justices agreed. But Mansfield, joined by Justices Brent Appel and Matthew McDermott, wrote that he believes Middlekauff’s Arizona registration still meets the threshold set by the law.

Christensen, writing for the majority, drew on how “order” is defined in other Iowa laws, saying it only applies only to “a controlled substance being directly dispensed by a practitioner to a patient or a medication order for the administration of controlled substances in the inpatient or institutional health setting.”

In addition, she wrote, it is not the doctor’s order but Arizona’s registry card that permits Middlekauff to purchase marijuana, and Iowa’s statute has no exception for drugs possessed pursuant to the order of a state entity.

“The dissent’s argument is comparable to providing a completed credit card application to a store clerk, rather than an actual credit card, when trying to purchase something. It is the credit card that enables the purchasing of something — not the completed application,” she wrote.

Mansfield pointed out in his dissent that the law Middlekauff was charged under does not say anything about an inpatient or institutional setting, and notes other Iowa laws use a similarly broad definition of a doctor’s order. And to the extent different laws conflict on the interpretation of the term, he wrote, the court should interpret an ambiguous statute in favor of the accused and reverse the charges.

Court records show Middlekauff was sentenced to two days’ time served in jail and one year of probation. Her attorney did not immediately respond to a message seeking comment on the decision.