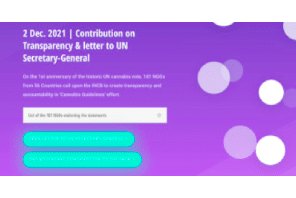 Cannabis Business Executive reports that people (read countries) are getting heartedly sick and tired of the  United Nations Commission on Narcotic Drugs (CND) and their Stasi-like approach to being public about any decisions never mind the one that matters, the issue of re-scheduling.

ONE year on from the formal recognition of the potential for cannabis as a medicine almost 200 global advocacy and civil society groups are backing for calls for greater transparency over emerging new cannabis guidelines.

However, since then the International Narcotics Control Board (INCB) has launched its own ‘Cannabis Control Initiative’ which threatens last December’s reforms, as BusinessCann reported recently.

#INCBcannabis
UN Secretary-General @antonioguterres to @INCB_President: "civil society should be heard & should be given space to express their opinion"
1️⃣ Letter to UN SG: https://t.co/3Y7xMOVVh6
2️⃣ Transparency inputs to INCB: https://t.co/u2D5sdVoN5
💡 https://t.co/OElddaJw5T pic.twitter.com/GMFcxV6k14

And, in an Open Letter to the United Nations Secretary-General, António Guterres over 181 NGOs from 56 countries call for ‘greater transparency and accountability in the INCB, particularly in relation to its Cannabis Control Initiative’.

The petition has been co-ordinated by Kenzi Riboulet-Zemouli and Michael Krawitz and signed by over 181 organisations from across the globe include South Africa, South America, Europe, Australia, New Zealand, Japan, Jamaica and the United States.

Respected European cannabis researcher and thought-leader Mr Riboulet-Zemouli told BusinessCann yesterday: “It is a year ago to the day since we saw cannabis and cannabis resin rescheduled under international drug laws. This decision legitimated the normalisation of cannabis medicines in healthcare systems.

“However, the INCB is developing its “Cannabis Initiative” international Guidelines in complete opacity. The little that is known about these Guidelines suggests they favour restrictive regulations that undermine access and availability of cannabis medicines, raising concerns about the legitimacy and scope of the process.

“We have sent this letter to the United Nations to ask for greater oversight over these manoeuvres by the INCB.

Mr Krawitz, a US Air force veteran and Executive Director of the non-profit Veterans for Medical Cannabis Access, added: “While not binding, these guidelines will impact and shape trade and production of a traditional, herbal medicine and a plant indigenous to many regions of the world. It will directly impact the lives of many of us, and the work of many others –researchers, doctors, traditional health practitioners, etc.

“The signatories to the letter recognise the important role that INCB plays in helping governments ensure access to, and availability of controlled medicines, for all patients in need, but they believe INCB should not shape the economic, social, environmental, and cultural future of many communities throughout the world without consulting them.”

The letter goes on the inform that the previous INCB President Cornelis de Joncheere had pledged to organise consultations with civil society stakeholders during the last Commission on Narcotic Drugs meeting in March 2021.

Mr Riboulet-Zemouli added: “Surprisingly, there has never been less information available about the Cannabis Initiative than after March 2021.”

Earlier this year BusinessCann reported on the concerns over the INCB’s Cannabis Initiative with leaked drafts showing it had failed to acknowledge the KanaVape judgement which ruled that cannabidiol (CBD) is not a narcotic.

The open letter goes on ask the UN Secretary-General to insist the INCB observes the following;

-The draft Cannabis Initiative guidelines should be made public, and therefore, follow the drafting process adhered to by other treaty bodies administered by the United Nations secretariat.

-The convened 133rd meeting of the INCB in February 2022, should be a transparent process and informed by civil society.

-That all interested parties, including clinicians, patients, farmers, researchers and regulatory experts should have the opportunity to contribute to the development and improvement of the Cannabis Initiative.

–And the INCB should not interfere with states from discharging their own obligations in relation to both drug control and other topics (human rights, environment, indigenous peoples, trade).

The letter highlights that although an independent treaty body, the INCB is administered by the United Nations and its staff are paid by the UN and should therefore be bound by the rules and procedures valid for all of their UN colleagues.

Currently, only an extremely concise agenda of INCB meetings is available publicly, as well as a vague narrative account of meetings in the annual reports.

The letter adds: “This is insufficient from our perspective. The procedures and working methods of other intergovernmental treaty bodies de facto administered by UN agencies similarly to INCB suggest that commonly disclosed documentation, which the Board should make available.”

The letter comes just days before the Reconvened 64th session of the CND takes place in Vienna, on December 9 and 10. Although the status of cannabis will not formally be on the agenda at this meeting.

Prof Mike Barnes, Chairman of the UK Cannabis Industry Council, which is a signatory to the letter said: “The INCB will soon produce a paper on the international status of cannabis.

“However, after a year they have been very quiet and do not seem to be pursuing a transparent course or involving others. We hope this letter will wake them up and  see them move towards a more inclusive and open process.”