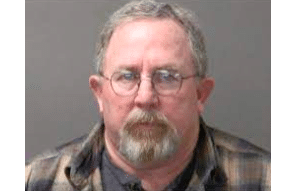 KLAMATH FALLS — A former narcotics detective and current reserve officer was arrested this week after a drug task force found about 1,200 illegal marijuana plants growing on his property in southern Oregon.

Eric Smith, 41, who is accused of leasing Shepherd’s property east of Klamath Falls to grow the marijuana without permits, was also arrested Tuesday at Malin City Hall by the Klamath County Sheriff’s Office. Smith faces the same charges as Shepherd.

It wasn’t immediately known if the men have lawyers to comment on their behalf.

Shepherd ran for Klamath County Sheriff in 2012 and worked for the Sheriff’s Office from 1990 to 2004 as a patrol officer and narcotics detective, among other positions. Since 2007, he has worked part-time for the Malin Police Department.

Investigators say there was no permit and the plants were not hemp.

Oregon State Police Sergeant Cliff Barden, who is also the BINET supervisor, said the property was leased to Smith, who was not licensed to grow hemp or marijuana at the location

Barden said the grower, Smith, had a legal permit to grow hemp elsewhere.

According to police, Shepherd said Smith was growing legal hemp on the property while fully licensed and in legal compliance. However, Barden said Shepherd did not check for documentation.

After test results conducted by the Oregon State Police showed the plants were marijuana, Shepherd and Smith were indicted by a grand jury, according to Costello.

Local law enforcement has been struggling to get a handle on illegal marijuana operations in southern Oregon. Last week, the Oregon Legislature dedicated $25 million to help law enforcement agencies and community organizations pay for the costs of dealing with thousands of industrial-scale, illegal pot farms.