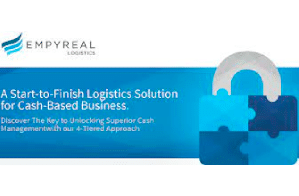 A Pennsylvania company is asking a federal court to return about $166,000 in proceeds from marijuana sales in Missouri that was seized by law enforcement in Kansas as the cash was on its way to Colorado.

Federal prosecutors claim the money is subject to forfeiture because of alleged violations of a U.S. law against manufacturing and distributing drugs. The driver of the van, though, hasn’t been charged with any federal crimes in Kansas, U.S. District Court records show.

Drug Enforcement Administration Special Agent Bryson Wheeler, who is stationed in Kansas, wrote the affidavit detailing the allegations of the case.

The approximately $165,620 in cash was seized by Dickinson County Sheriff’s Deputy Kalen Robison during a May 18 traffic stop on I-70 near the Abilene exit. The money was in a Ford Transit van owned by Empyreal Logistics

Robison first pulled the van over on May 17 for an unspecified traffic violation, according to the affidavit. The driver told the deputy that she was a Denver-based employee of Empyreal Logistics and had been tasked with transporting cash from marijuana dispensaries in Kansas City, Mo., across Kansas to a credit union in Colorado.

Court documents don’t indicate whether the dispensaries sold medical marijuana, which is legal under Missouri law.