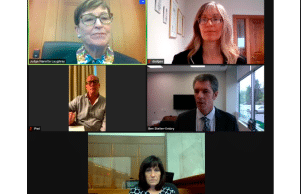 In a Thursday virtual hearing last week  that only lasted from 10 a.m. to 10:07 a.m., according to federal court records and cannabis news site GrownIn, Judge Nanette Laughrey of the Missouri Western District ordered a permanent injunction against the residency requirement.

(In late June, Laughrey blocked the state from enforcing the requirement with a preliminary injunction, federal court records show.)

In a blazing fast eight-minute bench trial, a federal judge ordered a permanent injunction in the Toigo v. DHSS case against Missouri’s cannabis license residency requirements, effectively eliminating the state’s rule that residents own a majority of a license. The bench trial was conducted at the request of the state attorney general’s office after Western Missouri District Court Judge Nanette Laughrey granted a preliminary injunction last June. However, leading up to the trial, attorneys for the state submitted no additional briefs, and once in court, Assistant Attorney General Emily Dodge offered no oral argument.

“I grant the permanent injunction. There will be a written order to follow, given the reasons, having heard no difference of the facts,” said Judge Laughrey just seven and half minutes into proceedings with a stern frown.

As soon as Judge Laughrey issues a written order, out of state entities will be allowed to obtain majority interest in Missouri cannabis companies. External investment has been a significant issue in the state, especially as only 34 of 60 licensed cannabis companies have been able to become operational since licenses were issued in September 2019.

Hopes for external investment could be brought to a halt however, if the Missouri attorney general appeals the case within 30 days of the issuance of a written order.

The case was brought by Mark Toigo, a Pennsylvania resident and minority owner of Organic Remedies MO, which owns a cultivation license in Chaffee and three dispensary licenses in Fenton, Sedalia, and Cape Girardeau. Toigo, who also owns and operates a similarly named group of dispensaries in Pennsylvania, is seeking to become a majority owner of the Missouri group, but is prevented from a clause in Amendment XIV of the Missouri constitution that states cannabis licenses, “shall be held by entities that are majority owned by natural persons who have been citizens of the state of Missouri for at least one year prior to the application for such license or certification.”

“I think it’s possible their posture is they wanted to get this before Judge Lowrey quickly to get an order from her they could appeal to the 8th Circuit [of Appeals],” said attorney Ben Stelter-Embry of Kansas City-based Green Leaf Legal, who represented plaintiff Mark Toigo in the case. “If we were to lose [in the 8th Circuit], there’d be a split between the 1st and 8th [Circuits]. That’s when the Supreme Court might take it up.”