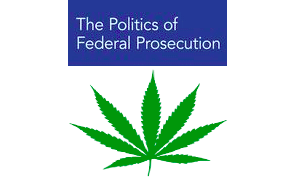 Federal prosecutions over marijuana dropped again in 2021, with fewer than 1,000 people charged in cannabis trafficking cases—yet another sign that the plant is becoming a lower enforcement priority as the legalization movement scores wins in more states.

There were 996 federal marijuana trafficking cases last year, according to an analysis from the federal U.S. Sentencing Commission (USCC). Those cannabis busts account for 5.7 percent of the total drug-related cases that when through the federal justice system in fiscal year 2021.

This represents a continuation of a trend that’s been playing out in recent years, especially as more states have move to legalize cannabis and federal officials have seemingly adopted policies placing less emphasis on going after people over marijuana. In 2020, USCC documented 1,118 cannabis cases.

Federal prosecutions of drug-related crimes overall increased in 2019, but cases involving marijuana dropped by more than a quarter, according to an end-of-year report released by Supreme Court Chief Justice John Roberts that year.

In contrast, USCC reported that there were more than 7,000 federal marijuana cases in 2012, the year when voters in two states approved adult-use legalization initiatives at the ballot. At that point, marijuana topped the list of drugs that were involved in federal cases; now cannabis is at the bottom of that list.

Federal Marijuana Cases Continue To Decline, With Fewer Than 1,000 Cannabis Charges In 2021