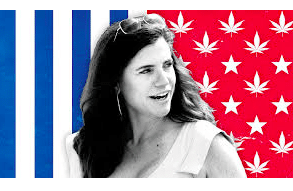 A bipartisan federal bill would instruct the U.N. to deschedule cannabis, arguing the war on drugs has negatively affected human rights, health, security, and development on a global scale.

A bipartisan federal bill introduced last week would instruct the United Nations (U.N.) to deschedule cannabis from its Schedule 1 status in the Single Convention of Drugs of 1961 and treat it as a commodity similar to other agricultural products.

Republican Rep. Nancy Mace (S.C.) said that were the U.N. to deschedule cannabis, many other countries would reevaluate their own classifications of the plant.

“Cannabis has been shown to be effective in the treatment of numerous medical conditions such as epilepsy, PTSD, cancer pain relief, nausea, and chronic and terminal illnesses. Descheduling at the U.N. would support global research into how cannabis can treat a wide range of ailments and conditions.” — Mace in a statement

Democratic Rep. Barbara Lee (CA) said that cannabis’ classification “as a schedule one drug is outdated, out of touch, and should be addressed not only in the United States but around the world.”

“Scientific research has shown that cannabis has wide-ranging positive effects on chronic illness treatment,” she said in a statement. “The United States should be leading the way on cannabis reform on the global stage, and descheduling at the United Nations would be a great start.”

Mace is also the sponsor of the States Reform Act which aims to end the federal prohibition of cannabis in favor of a tax-and-regulate model similar to alcohol. That bill has the backing of retail giant Amazon.

In 2020, the U.N. Commission for Narcotic Drugs voted to reclassify cannabis’ status under the 1961 Single Convention and remove medical cannabis from Schedule IV but stopped short of declassifying the plant.

A 2018 report by the International Drug Policy Consortium found that the U.N.’s ‘war on drugs’ has not reduced the rates of drug use but has negatively affected human rights, health, security, and development around the world. Specifically, the report argues that the last decade of drug law enforcement led to heightened violence against police and civilians and the mass incarceration of otherwise innocent people.