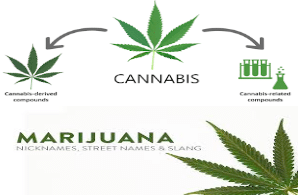 Now let’s see some other states make this simple change and take racism out of legislative wording…….

According to the Oxford English Dictionary, the term may come from the Nahuatl mallihuan, meaning “prisoner”.[8] Author Martin Booth notes that this etymology was popularized by Harry J. Anslinger in the 1930s, during his campaigns against the drug.[10] However, linguist Jason D. Haugen finds no semantic basis for a connection to mallihuan, suggesting that the phonetic similarity may be “a case of accidental homophony“.[11]: 94  Cannabis is not known to have been present in the Americas before Spanish contact, making an indigenous word an unlikely source.[12]

Other suggestions trace the possible origins of the word to Chinese ma ren hua (麻仁花, lit. ‘hemp seed flower’), possibly itself originating as a loan from an earlier semitic root *mrj “hemp”.[13] The Semitic root is also found in the Spanish word mejorana and in English marjoram (‘oregano’), which could be related to the word marihuana. This is also known in Mexico as “Chinese oregano”.[12]

Additionally, traditional association with the personal name María Juana (‘Mary Jane’) is probably a folk etymology. The original Mexican Spanish used forms with the letter ⟨h⟩ (marihuana), and is famously used in the Mexican Revolutionary era (1910-1920) version of the lyrics of La Cucaracha. Forms using the letter ⟨j⟩ (marijuana) seem to be an innovation of English, and their later appearance in French and Spanish are probably due to English influence.[8][14]

“The origin of the word “marijuana” foreshadowed its current use. Historically, the earliest and most numerous group of users in the Americas were slaves from western Central Africa (modern Gabon to Angola).[15] Their words for cannabis are now used in nearly all the places they (involuntarily) ended up during the 1700s and 1800s, which includes West Africa, the Caribbean and South America. Most notably, in Central America, the Kimbundu (Angolan) word mariamba became the Spanish word marihuana.”[16] Hence, “mariamba” is where the word “marijuana” comes from. The word “marijuana” as we know it today didn’t appear until 1846 in Farmacopea Mexicana, though it was spelled “mariguana.” In most following instances, the word was spelled marihuana.[17] [18]

Also read from the Guardian in 2018

With legalization, some states and communities want to help those carrying minor cannabis convictions to be able to clear their record. Similarly, several cities and states are trying to create so-called equity programs to enable entrepreneurs from communities hit hardest by the war on drugs to join the industry.

But when the industry had the chance to take a stand against the racism of the past, it backed down.

After the 2016 election, Donald Trump nominated the then Alabama senator Jeff Sessions to be attorney general, the country’s top law enforcement official. While some Republicans, including Trump, have expressed a willingness to co-exist with marijuana, especially for medical purposes, Sessions remains an unreformed drug warrior. In 2016, he said: “Good people don’t smoke marijuana.” Instead of protesting his all-but-assured confirmation, the industry’s primary trade group, the National Cannabis Industry Association [NCIA], decided not to risk angering him.

Washington Gov. Jay Inslee (D) signed a bill to change the word “marijuana” to “cannabis” throughout the Revised Code of Washington, the Cannabis Observer reports.

The bill was sponsored by Rep. Melanie Morgan (D), who also chairs the state’s Social Equity in Cannabis Task Force, and was one of the only cannabis-related bills to pass the Washington legislature this session. HB 1210 took more than a year to make it to the governor’s desk, the Observer notes.

During the bill signing ceremony, Gov. Inslee said the term “marijuana” has “a racist history in the United States. It was used in anti-immigrant rhetoric in the early 20th century.

“We are tied to our history of language,” the governor said, and the change “signals that we acknowledge the history of that language that targeted communities of color.”

Gov. Inslee is referring to the adoption of the word “marijuana” by cannabis prohibition factions in the early 20th century in order to seize on the anti-Mexican sentiments festering among the United States’ primarily white populace. The pejorative was picked up by the media in the 1920s and ’30s and was shared widely, with many referring to “marijuana” as the “Mexican killer weed.”

The campaign worked — by 1932, the plant was banned in 22 states and was made illegal in the entire U.S. by 1937 with the passage of the Marijuana Tax Act. Prior to the adoption of the word “marijuana,” cannabis had been often referred to in the U.S. as “Indian hemp,” “hemp,” or as a “preparation of cannabis.