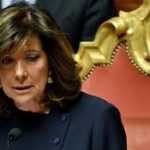 Italy’s parliament had given legalisation the green light while approving an amendment to the 2020 budget at the end of last week.

But in passing the budget early on Tuesday morning, the president of the Senate, Maria Elisabetta Casellati, declared the amendment “inadmissible” on technical grounds.

Parliament’s decision to legalise weaker cannabis products, containing less than 0.5 percent of the psychoactive compound THC, last week was widely seen as a victory for farmers and sellers across Italy who accused the former government minister Matteo Salvini of leading a “witch hunt” against Italy’s cannabis growers.

The former interior minister had vowed to close down all shops selling so-called cannabis light.

Casellati, who is a member of the centre-right Forza Italia party, an ally of Matteo Salvini’s League, said the decision was not politically motivated.

“If you think this measure is so important for the majority, then propose a bill,” Casellati told members of the Five Star Movement (M5S), which rules in a coalition with the centre-left Democratic Party (PD).

The decision cannot be appealed.

Last May, Italy’s highest court affirmed that the sale of cannabis was illegal, but gave judges discretion to consider the “narcotic effect” of the cannabis at issue when issuing decisions.

Cannabis production in Italy grew from 400 hectares in 2013 to 4,000 hectares last year, according to agricultural association Coldiretti