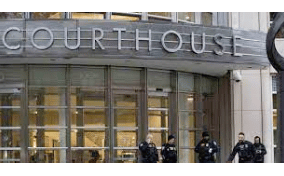 According to court filings, the defendants are members and associates of an armed robbery crew, operating since at least July 2020, targeting marijuana trafficking businesses in Brooklyn, Staten Island and the Bronx.

Ricketts, Jonathan Goulbourne and Jonas are in custody on the underlying indictment and will be arraigned at a later date.  Crossgill was arrested on June 15, 2022, arraigned the following day and released on bail.  Yesterday, Williams and Webber were arrested in Georgia and will be removed to the Eastern District of New York to make their initial appearances.  Mark Goulbourne remains at large.

“As alleged, the defendants’ robbery and drug trafficking activity exploded into violence with three persons shot, one of them fatally, demonstrating the lethal combination of guns and narcotics plaguing our communities,” stated United States Attorney Peace.  “This Office is working tirelessly with our law enforcement partners to hold these drivers of violent crime accountable and take away their means to wreak havoc.”

“The violence plaguing the streets of our city must be addressed by stopping the violent criminals who are killing each other over illegal drugs.  Innocent people are being harmed by these rivalries, and fear now dictates how we go about our lives.  It has to stop.  When the FBI New York and our law enforcement partners arrest and prosecute these criminals, we get closer to a safer community,” stated FBI Assistant Director-in-Charge Driscoll.

“Today, New York City is safer because of the exceptional effort and steadfast dedication of everyone involved in this investigation and indictment,” said NYPD Commissioner Sewell.  “The NYPD and our law enforcement partners remain focused on the small number of people who are responsible for the crime and disorder in our city, and we are working tirelessly to identify them and get them off our streets.  As demonstrated by this case, the deadly combination of drug trafficking, illegal guns, and brutal violence is a grave threat to our communities – and will never be tolerated.  I want to thank the US Attorney for the Eastern District of New York, the New York Field Office of the FBI, and everyone else who contributed to this important investigation.”

On December 2, 2021 and into the early morning of December 3, 2021, the defendants convened at an Airbnb in Brighton Beach, which had been rented for one night by the victim and his nephew, with several of the defendants posing as buyers in a wholesale marijuana transaction.  On December 3, shortly after midnight, the victim’s nephew and two male associates carried in four very large duffle bags of marijuana, approximately the size of hockey equipment bags.  Two hours later, a shootout ensued, leaving the victim fatally wounded and his nephew with a gunshot wound to the leg.  During the exchange of gunfire, Jonas was also shot in the abdomen.

Mark Goulbourne and Ricketts fled the scene with firearms in hand, and Ricketts with one of the duffle bags, which he transported on the handlebars of a stolen Citi Bike.  Mark Goulbourne retreated to a neighboring intersection, where he called his brother Jonathan Goulbourne, moments before entering an approaching car.  The car quickly reversed back up the street to the Airbnb.  Mark Goulbourne ran to the door with a firearm still in hand and peered inside, before reentering the car, which sped away.

The charges are the result of an ongoing Organized Crime Drug Enforcement Task Forces (OCDETF) investigation led by the United States Attorney’s Office for the Eastern District of New York and the FBI. The principal mission of the OCDETF program is to identify, disrupt, and dismantle the most serious drug trafficking, weapons trafficking, and money laundering organizations, and those primarily responsible for the nation’s illegal drug supply. OCDETF uses a prosecutor-led, intelligence-driven, multi-agency approach that leverages the strengths of federal, state, and local law enforcement agencies against criminal networks.

This case was brought as part of Project Safe Neighborhoods (PSN), a program bringing together all levels of law enforcement and the communities they serve to reduce violent crime and make our neighborhoods safer for everyone.  As part of the program, U.S. Attorneys’ Offices work in partnership with federal, state, local and tribal law enforcement and their local communities to develop effective, locally based strategies to reduce violent crime.

The government’s case is being handled by the Office’s International Narcotics and Money Laundering Section.  Assistant United States Attorneys Tara McGrath and Chand Edwards-Balfour are in charge of the prosecution, with assistance from Paralegal Specialist Gwyneth Hochhausler.